But the story took a surprise twist on Wednesday (July 5), with the 31-year-old actor and the 35-year-old actress announcing that they will tie the knot.

“Song Joong Ki and Song Hye Kyo plan to marry on Oct 31,” said their agencies, Blossom Entertainment and UAA, in a statement.

As recently as last month, the companies representing the stars of the hit Korean show had denied reports that the two were dating.

On Wednesday, the agencies were quoted as saying by Yonhap News Agency: “The situation demanded caution as marriage is a joining of not just two people but of two families.”

UAA quickly denied rumours that Song Hye Kyo is pregnant. It said she would continue to work after marriage. However, she will take "a while" off to prepare for the wedding, it added.

Following the announcement, attention turned towards a luxury home that Soong Joong Ki bought in January, which may be the couple’s new address.

The actor, who currently lives with his parents in Seocho-dong in southern Seoul, bought the two-storey house with a basement in the wealthy neighbourhood of Itawon-dong for 10 billion won (S$12million), said The Korea Herald. 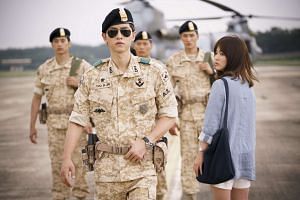 Descendants Of The Sun shot him to superstardom last year. In March last year, before the show’s finale aired, rumours of an off-screen romance spread like wildfire after he was spotted dining with his co-star in New York City. But the two rebutted the rumours.

Last month, they also denied reports that they had gone to Bali together.

In an interview with W Korea magazine this year, she said: “I devote myself fully to a relationship and never turn back when it is over. Even if you love your boyfriend so much, when you break up, he becomes no better than Mr Kim next door. Mr Kim next door can at least come by and help.”