American television series Criminal Minds: Beyond Borders has drawn flak for its inaccurate and "stereotypical" portrayal of Singapore, after an episode set here was aired on April 12.

In the episode, titled Cinderella And The Dragon, a group of investigators are on a case of two American flight attendants who have gone missing in Singapore. 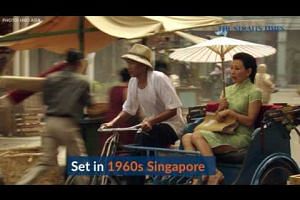 In her spiel, she says: "Officially it's known as the red-light district, but more accurately it's an overcrowded slum with a thriving underworld. In a country as affluent and educated as Singapore, employers have a hard time finding unskilled workers to do manual labour, so they get migrant workers from other countries to come do the menial jobs, but then that leaves the Ministry of Manpower with nowhere to put them, so a lot of times as a result they end up in government dormitories in Geylang."

Other inaccurate bits include a reference to Singapore Police Force as "Singapore PD".

"The country experiences fewer than 10 murders a year," one officer quips in the show.

"To keep crime low, Singapore's justice system is intentionally swift and severe," says Seger. "There's no such thing as trial by jury. Judges have been known to pass harsh sentences for foreigners who commit crimes."

"Isn't Singapore where that kid was caned for being drunk in public?" Mae Jarvis, played by actress Annie Funke, asks.

"Yeah. In 1993, an American college student was convicted of public intoxication and vandalism. He maintains to this day that he was coerced by Singapore Police into a false confession," answers her colleague.

This appears to reference the 1994 Michael P Fay caning, where the 18-year-old was sentenced to six strokes of the cane for theft and vandalism.

An article by "geek" community news site geekculture.co on Sunday (April 16) listed 20 mistakes in the episode.

The "misrepresentation" of Singapore irked netizens on various social media platforms, who pooh-poohed the episode for spreading misconceptions.

Wrote Facebook user Shahara Nordin Rogers on Criminal Minds: Beyond Borders' Facebook page: "Their depiction of Geylang is off. The red light district is definitely there but that area is not a slum for sure."

Jamie Tham added: "This whole episode has put Singapore in such bad light... Whoever is the writer of this episode needs to get the facts right."

She pointed out several flaws, including the wrong portrayals of Changi Airport and Singapore Police, along with the presence of roadside hawkers.

Dolly Oei wrote: "I cringed so much at the Asian stereotyping in the Singapore episode. Who does the research on this show? They need to be fired! It was just bad bad bad... You can't even get the accent right. No wonder so many people have been complaining about inaccuracies when their country was featured. You all want to know the REAL Singapore, come visit."

The episode is available on Hub VOD Entertainment (StarHub TV Channel 500) under AXN On Demand until May 1 this year, for Starhub's Entertainment Basic HD Upsize subscribers.

Have you guys watched the new Criminal Minds: Beyond Borders? Their latest episode featured Singapore AND OH MY GOD I FEEL SO IRKED!!!!