Mr Chang, a veteran of the local arts and music scene and once a long-serving chairman of Compass, died of cancer in December last year at the age of 78.

His last project with Compass was the Music Talents Development Fund, which was set up to help nurture young musicians of various genres.

Compass also handed out a Patron of music award to radio personality and singer Chris Ho, also known as X'ho. Ho was awarded for his contributions as a face of the local music scene, whether as the front man of band Zircon Lounge in the 1980s, a pop columnist for various publications including The Straits Times, or presenting radio shows throughout the 1990s to present day.

Compass awards are given to local musicians who earned the highest royalties last year, with Compass tracking the amount based on how many times their songs are played on radio and in nightspots and food and beverage outlets, and performed live.

Among the top-earning songwriters was Mandopop star JJ Lin who snagged both Top Local Songwriter of the Year and Top Local Chinese Pop Song for Ke Xi Mei Ru Guo. 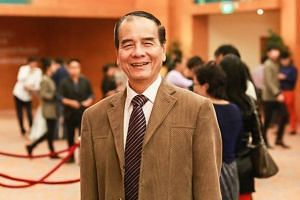 Chang Kwai Ming, veteran of the local arts and music scene, dies at 78

Among the recipients of the special awards was homegrown indie rock band M1LDL1FE who bagged the Young Artiste of the Year award, which is awarded based on performing royalties from all songs performed by an artist in the year.

They also took home the award for Top Local English Pop Song for the track In Your Arms, off their debut EP Pairs (2015), back when the band was known as Take Two.

Meritorious awards were handed to music arranger and composer Samuel Tan Chee Koon, and Dr Peter Low, who has served as choir master of the Cathedral Choir of the Risen Christ since its founding in 1971.

Jazz songbird and Sing! China second-runner- up Joanna Dong was among the performers on the night, closing the show with a medley of songs by Singaporean Mandopop singers Tany a Chua, Mavis Hee and Joi Chua.