TOKYO - A week after his girlfriend said he had physically assaulted her, Chinese actor Jiang Jinfu turned himself in to the authorities.

The 27-year-old, who was wearing a face mask and hat, was filmed entering a police station in Tokyo on Wednesday by TBS News.

Japanese media reported that he had admitted to charges of domestic abuse against his girlfriend, Japanese model Haruka Nakaura.

"Jiang Jinfu has contacted the Japanese police and is cooperating with the investigation. Please do not spread or create rumours until the investigation is over," his management team posted on Weibo.

Last week, Nakaura, 25, had stirred up online debate after she posted images of bruises on her face and body and said that the abuse had caused her to miscarry.

Netizens slammed the assault but some wondered if talk of her two-timing Jiang was true. 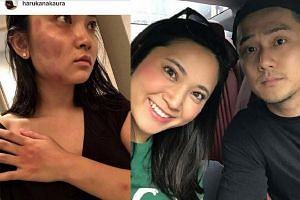 Jiang had responded with an apology, posting: "This month, I have spent (time) confessing and being remorseful."

Fans had wondered why he had kept a low profile even though he had a new TV show rolled out.

Nakaura has since given more details about her alleged suffering, telling a Japanese TV show on Tuesday that "the house was full of blood".

"He would hit me until he didn't have the strength any more, then he would kick me. I thought I was going to be killed."

"He knocked out two of my teeth, and when it was particularly bad, he used a hammer."

The police, who had issued an arrest warrant a day before Jiang turned himself in, said the injuries required treatment that took about a month.

The couple were staying at his apartment at the time of the alleged assault.