SINGAPORE - After more than three decades, iconic Channel 8 television drama The Awakening is getting a reboot with home-grown actor Tay Ping Hui in a starring role.

The new show, slated for release next year (2019), will be produced by Perfect World Pictures (Singapore), the Singapore arm of the Beijing-based entertainment company that produces television programmes and films. The Straits Times understands that the reboot will likely be shot in Malaysia and Singapore, but will employ a mix of local and China actors.

The original The Awakening (1983), about the lives of a group of first-generation Chinese immigrants in Singapore, had starred the late Huang Wenyong. It was a big hit with audiences and made Huang a major TV star in Singapore.

The reboot is one of several projects that Tay, 47, will be working on with Perfect World Pictures (Singapore), now that he is signed on as an artist with the company.

The new arrangement, which was announced at a press event at Mediacorp on Friday (March 9), will allow the actor to work on more China-backed projects. Besides The Awakening, he has also been cast in an upcoming Chinese period drama titled Handsome Siblings.

Tay will also continue to work on Mediacorp programmes.

He said at the press event: "This is definitely not goodbye - why should it be? No doubt I will be focusing most of my energy on the China market but I would be delighted to work with Mediacorp again if the role is suitable and my schedule allows. As for these coming months, Singapore viewers can still catch me on Tanglin and a new Chinese drama, Babies On Board, which will debut in May this year."

In addition to The Awakening, Perfect World Pictures has also acquired the intellectual property (IP) rights to another iconic Singapore drama - The Little Nyonya (2008), about the inter-generational lives of an extended Peranakan family. 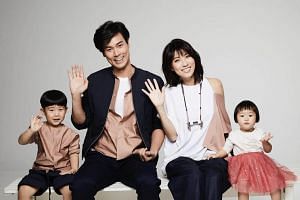 Quest for new opportunities prompts exodus of artists from Mediacorp

On the Perfect World Pictures web site, a casting notice is up for "The Little Nyonya - New Edition".

"There has been growing interest in China in Mediacorp's evergreen dramas such as The Awakening and The Little Nyonya. Having obtained the IPs from Mediacorp, we are optimistic that the remaking of these series - starring Ping Hui and actors from China - will be a hit with audiences in China, Singapore and the region."