Los Angeles (AFP) - Black Panther star Chadwick Boseman revealed on Tuesday (Jan 30) that doubters had tried to convince him not to give the superhero an African accent - and how proud he was to prove them wrong.

The 41-year-old American stars in the title role in the 18th movie in the Marvel Cinematic Universe - the first black superhero to get his own standalone movie.

"There was a time period where people would ask me questions about whether or not an audience could sit through a movie with a lead character that spoke with that accent," Boseman said of the east African inflection he gives the superhero, alias King T'Challa.

"I became adamant about the fact that it's not true," he added, stressing that none of the naysayers had come from within Marvel but from "the outside".

"The intonations and melodies inside an African accent are just as classical as a British one or a European one."

Boseman was speaking at a Beverly Hills news conference along with director Ryan Coogler and co-stars including Michael B. Jordan, Lupita Nyong'o and Danai Gurira the morning after Monday's glittering Hollywood premiere.

The actor got his break after a decade as an obscure television and indie film actor when Marvel came calling in 2014 with a lucrative five-picture deal to play Black Panther.

His appearance in Captain America: Civil War (2016) gave him his first taste of real fame and his celebrity looks set to skyrocket when Black Panther opens on Feb 16, followed in May by "Avengers: Infinity War." .

T'Challa is king and protector of the technologically advanced fictional African nation of Wakanda. 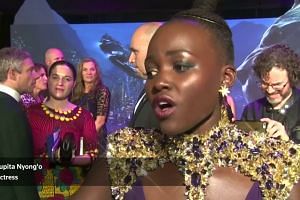 "All the emotions and aspects of the character can be shown...with that accent, and we have to take the opportunity to show that," Boseman said.

Born in South Carolina, the son of a nurse and an upholstery entrepreneur, Boseman has roots in the west African state of Sierra Leone.

Before Marvel, he was best known for his acclaimed portrayals of the legendary Jackie Robinson in 42 (2013) - which had the highest-grossing debut for a baseball movie in Hollywood history - and of soul singer James Brown in Get on Up (2014).