HONG KONG - Typhoon Hato was moving towards Hong Kong on Tuesday (Aug 22) night, but it did not stop Andy Lau from attending his first film premiere in the city after a January horse-riding accident.

The 55-year-old actor said he had recovered 95 per cent from his low-back injuries, but his doctor was not in favour of him attending public events such as the premiere of The Adventurers at Festival Walk mall, reported Apple Daily. Stephen Fung, who directed the movie, and Shu Qi, who co-stars, were also present.

"This time, I persuaded the doctor to let me do this," Lau said of the premiere. "The doctor was afraid I would be pushed."

He had been out of action for more than six months after being thrown off a horse during a shoot for a tea commercial in Thailand. He returned to work this month, beginning with a publicity stop in Beijing for The Adventurers.

He said he had injured his L5 and L6 vertebrae, cracking one and breaking the other, which would "take one to two years to completely heal". He said he had physiotherapy soon after the accident because there are 28 steps to climb to reach his house, reported Ming Pao Daily News. 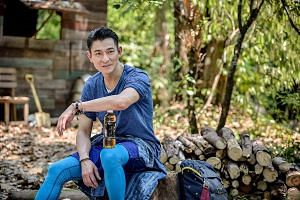 His doctor would not let him go home before he could climb 120 steps a day and had learned how to go to a toilet and shower while in a wheelchair.

It also took Lau four months - and many squats and dumbbell exercises - to build up his strength and hold his five-year-old, 20kg daughter again, he said. He is now fit enough to run on a treadmill at home and do strenuous exercises, but is less flexible.

Andy Lau going back to work after horse-riding mishap

"I haven't done a leg press in six months. I can do it only in a physiotherapist's presence, I can't do it at home on my own, so I can't do a split either."

Recalling the accident, he said it was fated. He had actually dismounted, but then got back on the horse because a few more shots were needed, he explained.

The accident had traumatised him and he said he might need a stunt double for future horse-riding shoots.

After all the trouble, the horse-riding shots were cut from the commercial because "the advertisers didn't want to bring back my memories of this", he added.