SINGAPORE - Hong Kong Heavenly King Andy Lau will perform four concerts at the Singapore Indoor Stadium, from Sept 25 to 28, as part of his latest My Love Andy Lau World Tour.

This marks the superstar's return to Singapore after 11 years. His last concert in Singapore was in 2008, also at the Singapore Indoor Stadium.

His current tour kicked off at the Hong Kong Coliseum in December 2018 and tickets to all 20 shows were snapped up shortly after going on sale.

The solo concerts were his first following a 2017 horse-riding accident. During the shows, he sang Cantonese hits such as You Are My Woman and If One Day, as well as Mandarin numbers such as Forget Love Potion and Chinese People.

To replicate the Hong Kong concert, close to 40 containers will be shipped in.

At the upcoming show, Lau, 57, will perform on a grand four-sided stage that has 60 lifts and two catwalk stage extensions, and which will move in accordance with the music. Different scenarios will be created through video projection and lighting effects.

A giant projection screen will cover more than half of the arena's ceiling, showcasing various visual effects and artworks, including a picture drawn by Lau's seven-year-old daughter Hanna. 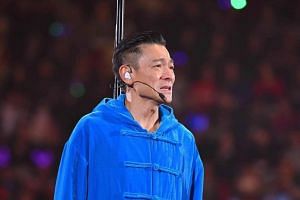 Down with the flu, Andy Lau cancels remaining 4 shows in Hong Kong

General sales start from June 1 at 10am.

Concert promoter Unusual Entertainment is organising the Singapore leg of the tour, and the Chinese Media Group of Singapore Press Holdings is the event’s official media partner.