SINGAPORE - Hundreds of local actress Rebecca Lim's fans and the media fell for a publicity stunt of hers for an endorsement deal.

The 29-year-old star clarified in a conference call at about 8.20pm on Friday night (Feb 12) that her Instagram post earlier that day was part of a collaboration with insurance company NTUC Income.

She said: "I feel sorry for any misunderstanding that is being caused. Unfortunately, there are many people who have misinterpreted or misunderstood... I don't think I'm making use of the media. I'm just trying to maximise my reach as a celebrity."

She then posted a video on Facebook on Friday night clarifying that the Instagram post was a publicity stunt to remind "young professionals to plan for the future".

The Straits Times tried in vain to contact her and her manager on Friday to clarify the post. Her manager sent in a text message: "Thank you for your concern about Rebecca. She will have answers to your questions soon. We seek your kind understanding."

Lim herself replied, also by text message: "Will update you as soon as I can :)"

The actress claimed during the conference call that she was too busy filming to respond.

Fans reacted strongly to the post, which went up on Friday morning.

She wrote in a caption that: "Hi everyone. I've decided to do something that will change my life. I have been thinking about it for a while now as I know it has to be done.

"Yes, I am retiring. I know you may have questions for me and I will answer them real soon. Meanwhile, be happy for me."

The caption has since been removed. The post gathered more than 11,800 likes and more than 550 comments, mostly from fans who believed her.

Netizen guoquanwong said: "Few have such a blessing to make this choice early in life. Do cherish it. Enjoy your next phase of life and thank you Rebecca! Indeed we will be happy for you!"

But some were sceptical. Netizen sandralim_2005 asked: "Are u sure you're gonna do this?"

There were also those who thought she won the lottery, was getting married, or was pregnant.

After reading the online speculation, Lim and the other parties decided to hold the conference call.

Lim said: "(After reading the speculation), I started feeling a bit sorry. And I felt it was my responsibility to clear the air immediately."

Lifestyle magazine 8 Days posted on Instagram on Friday night to say that the actress was only "advocating the mindset of early financial planning".

Representatives from NTUC Income and Mediacorp were also present during the conference call. They said there will be a press conference on Monday morning (Feb 15) to clarify the situation.

ChannelNewsAsia (CNA), which is part of Mediacorp, had published an online article on Lim's "retirement". But this article had been taken down before the conference call.

Sources told The Straits Times that CNA was told to pull down the story. However, Mediacorp's representative said no news outlet was informed of the stunt until the conference call. 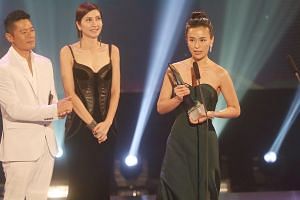 This is not the first publicity stunt involving an insurance company.

In 2011, a campaign by one such company involved a "couple" where the man was abruptly "killed" and hence needed insurance. The stunt was slammed by fans, saying it was in bad taste.

When asked, Lim said she was not aware of this previous case.