(REUTERS) - Ghostbusters actress and comedian Leslie Jones' website was hacked on Wednesday (Aug 24) and nude photos and personal information including her passport and driver's licence were posted, according to media reports.

Several accounts of the hacking, which was first reported by TMZ.com, said it appeared the website was accessed through Jones' personal cellphone or iCloud account, which lets users store photos and other content online and access it from any Apple device.

Representatives from Apple and Jones' agent did not respond to requests for comment.

Among the images posted to her website was a video of Harambe, the gorilla killed by the Cincinnati Zoo after a three-year-old boy fell into his pen in May, according to the reports.

Jones, 48, became a top trending topic on social media on Wednesday after the news.

Many Twitter users expressed support for the actress, who was a target of racist bullying on Twitter in July. 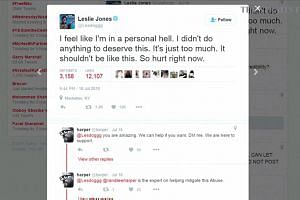 "These acts against Leslie Jones... Are sickening. It's racist & sexist. It's disgusting. This is hate crimes. This ain't 'kids joshing round'," tweeted musician Questlove Gomez (@questlove).

Ghostbusters director Paul Feig (@paulfeig) wrote on Twitter, "What's happening to @Lesdoggg is an absolute outrage... haters, trolls, 'comedians,' whoever... you all are, you're just sad."

In 2014, Apple confirmed that nude photos of celebrities including Oscar-winner Jennifer Lawrence had been accessed through the hacking of iCloud accounts, then posted online.

Apple said the leaks resulted from targeted attacks on accounts in which personal data was stored, and not a direct breach of Apple systems.

After starring in the Ghostbusters film this summer, Jones briefly quit Twitter because she was bombarded by racist and abusive comments.

In response, Twitter permanently suspended numerous accounts and said it was taking steps to confront abusive behaviour on its network.