SINGAPORE - An action-comedy replete with nail-biting gun battles, heart-pounding chase sequences and sleek hand-to-hand combat scenes is not something usually associated with Singaporean director Jack Neo. After all, the director is mainly known for his series Ah Boys to Men, which started in 2012, where soldiers fired a few rifles at most.

His new movie, Killer Not Stupid, which opened in cinemas here and Malaysia on Tuesday(Feb 5), is full of action because Neo believes the genre has the potential to reach an international audience.

In a phone interview last week, Neo also said that he had always admired action-packed films such as Deadpool (2016) and the Ip Man film trilogy (2008 to 2015).

"Since comedy is my forte, I melded the two genres, and did an action-comedy," said the 59-year-old.

Killer Not Stupid is about two assassins, played by Taiwanese stars Jay Shih and Lin Yu-chih, who is better known as Nadou, on their way to complete a final mission before retiring.

Neo acknowledged that working intensively with guns, knives and explosives presented new challenges, such as how to present an action scene for the camera.

These obstacles were partly why he shot the movie mainly in Taiwan, as he felt the Taiwanese film industry is more developed than Singapore's and allowed him more access to props such as police cars and guns. 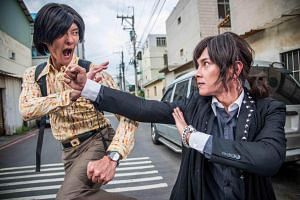 "The Taiwanese have also worked on action films for many years. I was even given a catalogue to decide which type of gun I wanted to use in the film," said Neo who filmed the movie in the second half of last year.

There were also stunt directors he could consult to choreograph the action scenes as well as the freshness of filming overseas.

Having worked with Taiwanese artistes since his days on the the 1990s variety show Comedy Night, Neo also felt a rapport directing them.

"Although they sometimes use certain Chinese words differently from Singaporeans, we could largely get each other's jokes."

Neo pointed to Taiwanese singer-actor Amber An, as a standout among his cast.

"She is a beautiful, rare talent with great comedic potential," Neo said of An, who plays a ditzy, scatterbrained character.

"Even though he is a handsome idol, he was game to do scenes which were less glamorous," said Neo, without revealing details.

In a separate phone interview, Shih, said he felt pushed to his limits every day of filming.

"Before working with Neo, other people told me I had to give myself 'wholly' to him. After filming, I realised they were right. His mind works very quickly, and I had to use everything I had to keep up," said the 35-year-old, adding that he had to get used to Neo's habit of re-writing the script while on set.

"Whatever script we received was different from the final one used. I had to react so quickly to his adjustments."

Neo explained that he does that to make the film funnier. " I told the actors that they could handle it because their Mandarin was strong," h e said.

The movie is slated to be released in Taiwan, likely between March and June this year.

And as for his future projects, Neo plans to start production on the drama Long Long Time Ago 3 after Chinese New Year and work on more action films.

"Basically, I want to try everything," he said. "I might also think of doing a sci-fi film one day, but I will need time to get the budget."