NEW YORK (BLOOMBERG) - Abominable, an animated movie about a girl who befriends a yeti, got a warm welcome at the box office over the weekend.

Abominable, a co-production with a Chinese studio and featuring the voice of Chloe Bennet as a teenage girl named Yi, is the first animated picture of the fall season.

Yi finds a yeti on the roof of her home in Shanghai, names him "Everest" and sets off to help him get home to his family.

The movie furthers inroads for Asian characters in big-studio movies, following on the success of Crazy Rich Asians last year.

A live-action remake of Mulan is due next year.

Abominable was written and directed by Jill Culton, the first woman to be the sole writer/director for a major animated release. 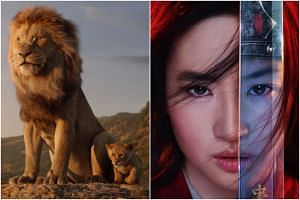 From The Lion King to Mulan: The economics of remakes

It is a co-production between Universal's DreamWorks and Shanghai-based Pearl Studios.

Downton Abbey took second spot with US$14.5 million while Hustlers came in third with US$11.5 million.

This year remains a sluggish one for the box office, compared with a record-setting 2018. For this year to break even with last year, every week from here on would need to average US$35 million more than its 2018 equivalent, IndieWire says.

Joker could open next week as high as US$125 million and shatter the US$80 million record held by It in 2017 for the biggest-ever October opening.

Disney's live-action Maleficent: Mistress Of Evil, based on the classic Sleeping Beauty, could help revive the box office later this October.