STOCKHOLM (WASHINGTON POST) - A Swedish judge said US rapper A$AP Rocky and his two associates did not need to remain in custody while awaiting the Aug 14 verdict in a trial over assault charges in Stockholm.

One of the defence lawyers confirmed that the three men were free to leave Sweden but would not say whether or not they would.

As the proceedings, which have captured international attention and heightened tensions between the United States and Sweden, came to a close that day, Rocky's mother cried while he comforted her.

If found guilty, all three face up to two years in prison.

Swedish authorities arrested the 30-year-old rapper and two of his associates, Bladimir Emilio Corniel and David Tyrone Rispers, in early July on charges of violent assault after a June 30 street fight with a 19-year-old man, Mustafa Jafari.

Rocky pleaded not guilty ahead of his trial.

The defence lawyer confirmed that no new evidence can impact the verdict.

A prosecutor argued on Friday that Rocky should be punished more severely than his two associates.

The remarks were made as the closely watched proceedings appeared to near their end.

"I have been a lawyer for 20 years, and I have never had a client who has been so scared," the 19-year-old plaintiff's counsel said.

"He feels no resentment towards any of the accused, but justice must be served," he added. 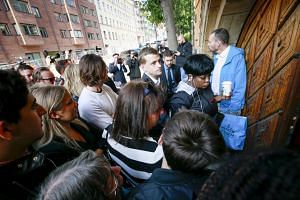 One witness testified in court on Friday that Jafari was beaten so severely that he lay in the street unconscious after the alleged assault.

But one of the defence lawyers, Carla Pantzar, sharply attacked Jafari, saying: "The plaintiff is lying, and the only time he is not lying is when he refuses to answer."

Dozens of fans of the artist and journalists lined up in front of the Stockholm District Court, where the trial began on Tuesday.

Supporters of the rapper shouted "Free Rocky!" when his mother entered the courthouse.

One supporter, Emina Moreira, 19, said Rocky had been treated unfairly by the Swedish court system, and blamed racism as a possible cause.

Other celebrities, she said, have gotten away with crimes.

But 26-year old Zakaria Anwar, an industrial engineering student in Stockholm and a fan of the US rapper since 2013, said he trusts the Swedish justice system - even if Rocky and his associates are found guilty.

That Sweden is sticking to its rules and "not trying to get affected by things Donald Trump is saying" was making him proud of the country, said Anwar.

"Justice is the most important thing."

Sweden's justice system is regularly ranked among the world's most reliable, but the rapper's arrest and weeks-long detention without charges have sparked an outcry in the United States, where celebrities and politicians rushed to his defence.

Kim Kardashian, Kanye West and Justin Bieber have called for his release, as have Democratic members of Congress.

Rocky found a particularly influential - albeit unlikely - ally in Trump, who called on the Swedish government to give the rapper "his FREEDOM" and instead focus on its "real crime problem" - an apparent reference to migrants.

Migration status has weighed heavily in this case, as the 19-year-old plaintiff is from Afghanistan and has a criminal record.

"Sweden has let our African American Community down in the United States," Trump wrote on Twitter.

The president tweeted his support for the rapper after Friday's developments.

The case has morphed into a diplomatic scuffle as Trump implied that Rocky's race prompted Swedish authorities to bring charges against him - a suggestion that the Swedes have resoundingly rejected.

Some have speculated that Trump got involved to divert attention from his own racist comments directed at four minority congresswomen - remarks that set off a political firestorm last month.

Swedish officials have said it is neither possible nor appropriate for Prime Minister Stefan Lofven to intervene on Rocky's behalf.

Trump also dispatched his hostage affairs envoy, Robert O'Brien, to Stockholm to attend this week's trial - a move that has been widely ridiculed in Sweden.

The Swedish prosecution authority said Friday that it has rejected an apparent request by O'Brien to release Rocky and his associates.

Karin Rosander, a spokeswoman for the Swedish Prosecution Authority, said that a US Embassy letter apparently signed by O'Brien demanded that the three suspects be transferred to a hotel. Rosander said she was not aware of any comparable request by any other nation in the past.

In a statement to The Washington Post, a spokeswoman for the US Embassy in Stockholm said the embassy was "unable to comment on diplomatic exchanges."

O'Brien refused to answer questions when approached inside the courtroom Friday.

"The goal is to bring Rocky, Bladimir and David home to their friends and families in America," a senior State Department official told The Post this week.

After both the plaintiff and Rocky testified on Thursday, the court heard from several witnesses on Friday.

One of them, the plaintiff's friend - who is suspected of an unrelated crime - was led into the courtroom in handcuffs. In his testimony, he backed up the plaintiff's version of events, saying that the 19-year-old was beaten by Rocky and his entourage.

The rapper repeatedly claimed he acted in self-defence - a stance he reiterated when he took the stand on Thursday. Rocky, who was in the country to headline a two-day hip-hop festival, said a group of men whom he suspected of using drugs approached him and followed him and his entourage.

Rocky added that he and his associates "pleaded" and "begged" them not to start a fight, according to NBC.

Swedish prosecutors, meanwhile, argued that Rocky and his associates instigated the attack and hit plaintiff Jafari with a bottle. Jafari is seeking more than US$14,000 in damages. Investigators found a glass fragment on Rocky's sweater, and prosecutors said Rocky edited and circulated a video that distorted the events to make him and his associates appear to be the victims.

The rapper denied attacking the plaintiff with a bottle and said he and his associates had seized bottles only to block the plaintiff from using them.

In court on Friday, Rocky's lawyer Slobodan Jovicic demonstratively placed a bottle on the judges' table. If the plaintiff had indeed been hit by a bottle of comparable size and weight, he argued, his injuries would have been far more severe.