Mr Peter Cook, the former husband of supermodel Christie Brinkley, is ready to say "I do" again.

According to People magazine, the architect got engaged to Ms Alba Jancou, a student, in September in Santorini, Greece.

"We consider ourselves incredibly lucky to have found, in each other, our soulmate," Mr Cook told the Page Six portal.

"We are looking forward to many years of wedded bliss."

The two have reportedly dated for about a year.

They divorced after she got wind of his affair with Ms Diana Bianchi, his then 19-year-old assistant.

There were also reports that when he was dating Brinkley, he was involved in another relationship with a 19-year-old girl.

During the highly-publicised 2008 divorce contest, the court was told that Mr Cook paid Ms Bianchi US$300,000 to keep their relationship secret.

After separating from Brinkley, he married Ms Suzanne Shaw but they split up in 2014. 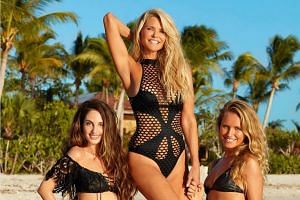 American model Christie Brinkley, 63, gets back in bikini for Sports Illustrated Swimsuit Issue

Age is just a number in May-December romance

Ms Shaw reportedly revealed that he had an eye for younger women, and that she had not heeded warnings from Brinkley about his wandering ways.

Ms Jancou, who is the same age as Mr Cook's daughter with Brinkley, stirred up speculation about a romance when the couple were spotted together at several high-society events over the past few months.

Now, the announcement of their engagement has set off talk over their 39-year age difference.

Brinkley herself has also had to fend off nasty comments in September over her pull-out from TV contest Dancing With The Stars after she said she broke an arm during rehearsals.

Talk-show host Wendy Williams said she did not think Brinkley was telling the truth.

The latter shot back on another talk show, saying: "My message to Wendy is, it's so much more fun to be kind. Try it. It can't feel good to try to hurt other people.