According to Yonhap, YG Entertainment said the 29-year-old rapper was found unconscious and is currently receiving treatment at an intensive care unit of a Seoul hospital.

Citing police, Yonhap said T.O.P appeared to have overdosed on tranquilisers that he had been taking for medical reasons.

On Monday prosecutors said T.O.P had been indicted without detention on charges of smoking marijuana.

The Seoul Central District Prosecutors' Office said the 29-year-old is suspected of smoking the drug four times with an aspiring female singer at his home in Seoul in October last year.

T.O.P initially denied he had done anything illegal.

After police came up with positive test results, the rapper changed his position and has issued a letter of apology, reported the Korea Herald.

T.O.P has been serving his mandatory military service as a conscripted policeman since February, Yonhap said. 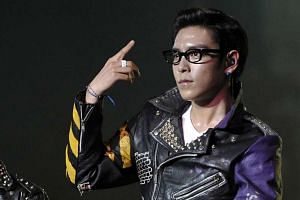 K-pop star T.O.P of BigBang arrested for marijuana use: Report

His military service period will be put on hold until a verdict is reached, the report said.

The use of marijuana is banned in South Korea and can be punished with a maximum of five years in prison or a fine of up to 50 million won (S$61,000).