SINGAPORE - Artist Suzann Victor sat in a flooded drain at the Singapore Art Museum for her 1997 work Still Waters (Between Estrangement And Reconciliation). It was a metaphor for the limbo performance art existed in then, because of a de facto ban on the art form.

Responses to her work have been curated for the upcoming M1 Singapore Fringe Festival: Still Waters from Jan 16 to 27. Many delve into parts of local history that have been overlooked, much like the drain Victor focused on in her work.

For Victor's 1997 piece, glass panels were installed in a drainage gutter at the museum so the space flanked by panels and museum wall could be filled with water, reversing the original purpose of the drain. Viewers facing the work were also turning away from the "glam spaces" of the then refurbished museum, "similar to protests when you face away from a presidential motorcade," says Victor.

Speaking on the phone from Sydney, where she is based, the 59-year-old artist adds: "I didn't expect to get permission to do a critique on the museum and the architecture, but I did."

The work was created with the support of museum curator Joanna Lee and presented soon after a 1994 ban on funding performance art (which was lifted a decade later) .

In 2001, Victor was one of four artists showcased during Singapore's debut at the prestigious Venice Biennale, leading her to believe that there were no negative consequences to her defiant act.

She will speak about her artistic practice on Jan 12, ahead of the Fringe Festival opening. "I'm interested in how the body can respond to architecture," says the artist, who is best known for public art installations that are often kinetic sculptures responding to architectural spaces. One hangs in the glass atrium of the National Museum Singapore, Wings of a Rich Manoeuvre, 2016, made of bird-like Swarovski-crystal-studded chandeliers that swing in eight different patterns and are meant to mimic the flight of fantastic beasts. It replaced a similar work by Victor that hung in the museum from 2006 to 2016 - Contours Of A Rich Manoeuvre, made of eight red swinging chandeliers. 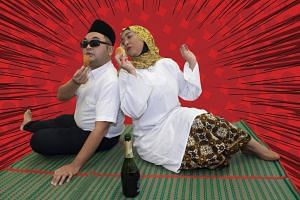 Of the 12 ticketed performances and exhibitions in the Fringe programme next year, six are created by local artists. Festival director Sean Tobin says: "It is also important to see how the programme itself can become a fresh conversation too; each artwork responding to Suzann's work, but also allowing for a conversation of sorts between the different works."

Overlooked migrants workers are the focus of two pieces: local theatre collective Patch And Punnet has created a darkly comic fantasy starring a migrant construction worker, The Adventures Of Abhijeet; while Singapore photographer Sean Cham is showcasing images of migrant workers in various industries here. The exhibition titled This Is Where will be displayed at selected bus shelters from Dec 26 to Jan 29 and is co-presented with outdoor advertiser JCDecaux.

Interdisciplinary artist Loo Zihan, 35, was struck by Victor's ability to produce performance art in a space - physical and metaphorical - that was not supportive of it. His lecture-dialogue Catamite explores what everyday objects can say about the owners, for example, an antique watch belonging to a gay couple and symbolising their relationship. Loo points out that queer histories are often overlooked in Singapore and says: "The entire piece asks how we can draw attention to objects that have been ignored?"

Next year marks the 15th edition of the home-grown annual Fringe Festival, which is sponsored by telco M1 and organised under local troupe The Necessary Stage. The 14th edition held this January was also programmed in response to a work by a seminal local artist - Amanda Heng's 1999 performance against beauty stereotypes, Let's Walk, and included a recreation of the work by the artist herself.

For the full line-up of the M1 Singapore Fringe Festival 2019, go to www.singaporefringe.com/fringe2019

Other highlights of the festival

* precise purpose of being broken

WHAT: Singaporean theatre-maker Koh Wan Ching adapts a collage of texts by playwright Haresh Sharma of The Necessary Stage into a multi-lingual narrative peopled with fascinating characters. This work was first presented last year (2017) by the Esplanade - Theatres On The Bay for its The Studios: Raw season.

WHAT: This playful and intimate dance production is based on a famous 1977 psychological study about the 36 questions that make strangers fall in love. It is presented by British-Israeli choreographer Rachel Erdos and her Rachel Erdos and Dancers troupe.

WHAT: British theatre company New Perspectives explores the tensions and pressures of being a medical practitioner in today's world. The title comes from the biography of an English doctor held up as a model of wisdom and compassion, who took his own life.