SINGAPORE - In the running for a top regional arts prize are Singapore artists Sarah Choo Jing and Nicola Anthony, who are among 31 finalists for The Sovereign Asian Art Prize, chosen from a record number of over 600 entries from 30 countries.

It aims to recognise the growing wealth of contemporary art talent in Asia.

This is contemporary artist Nicola Anthony's third consecutive year as a finalist, while multidisciplinary artist Sarah Choo Jing was previously shortlisted in 2014. No Singapore-based artist has won thus far.

Ms Choo, an art educator, submitted a pair of photographic prints from her 2018 solo exhibition at Yeo Workshop in Gillman Barracks.

Titled Accelerated Intimacy (Matthew and Brenda), the prints are of two individuals in separate hotel rooms, who appear as though they could be speaking to each other.

The 30-year-old says she was intrigued by her own experiences abroad, and the idea of hotel rooms as "transient spaces" which "present themselves as homes but are not".

She used to slip notes under the doors of her neighbours in hotels all over the world, which led to some surprisingly impactful conversations.

She felt inspired by those moments of potential connection, even between complete strangers.

On her work being shortlisted, Ms Choo says: "It is definitely affirming, and it means a lot to me for this piece to be recognised."

Ms Anthony, 35, a full-time artist represented by Intersections Gallery in Singapore, also felt honoured to be chosen as a finalist. 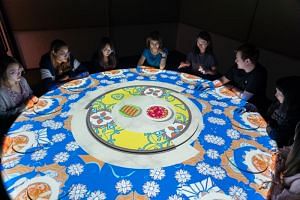 Her submission, Poetry Net (I), is a text artwork made using the plastic protective film found on acrylic sheets.

She cut the translucent sheets by hand, then used a machine to turn them into lace-like letters.

They spell out a poem she wrote about displaced and disenfranchised migrants.

It took her around five years to complete the project, which involved conducting research and interviews with migrants from both Asia and Europe.

She says: "I am very pleased on behalf of the communities I work with, and hope this can help share their stories and build compassion between diverse groups." 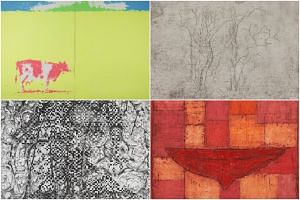 This year's winner will be selected by a panel of five judges and announced in May.

The prize-winning piece will be kept as part of the foundation's collection, while all other shortlisted works will be auctioned off by Christie's Hong Kong.

Half of the proceeds will go to the artists, while the other half will be used to fund art programmes for disadvantaged children.