The latest author to land an overseas book deal is Rachel Heng, 29, whose literary science-fiction novel was taken up in June by publishers in both Britain and the United States.

Tentatively titled Suicide Club, the novel is set in a near-future dystopia, where the average life expectancy is 300 years.

In it, society is obsessed with wellness and genetic perfection.

British publisher Sceptre, the literary imprint of British publishing house Hodder & Stoughton, and US publisher Henry Holt & Co have picked up her novel for six-figure sums each.

While Heng's novel is set to be released in August 2018, those wishing to read local works have plenty to choose from. Here are some other Singaporean authors whose books have been picked up by overseas publishers. 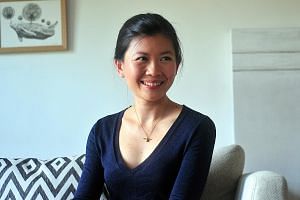 The acronym SPG, which stands for Sarong Party Girls, a stereotype associated with Singaporean women who exclusively date white men, is a contentious one. And Cheryl Lu-lien Tan, 42, chose to make it the subject and title of her debut novel.

Published in 2016 by William Morrow, an imprint of publishing house HarperCollins, Tan's novel is about protagonist Jazzy Lim, a Singaporean woman who is on a quest to find a Caucasian husband. The novel went on to set a new record for the amount of time it stayed on The Straits Times' bestseller list: It spent 32 weeks on the list in total. The book that held the record previously, Singapore-born American Kevin Kwan's China Rich Girlfriend, was on the list for 26 weeks in 2015.

Besides Sarong Party Girls, Tan has written a food memoir, A Tiger In The Kitchen, about rediscovering her heritage by cooking Singaporean dishes. It was published in 2011, by Hyperion Books in the US.

With eight novels under her belt, Meira Chand's novels spring from the confluence of different cultures in her life and she explores themes such as identity and belonging. She is of Swiss-Indian parentage, was born and educated in London, and is now a Singapore citizen.

From a book on the Nanjing Massacre to her most recent work set during the Japanese Occupation of World War II, Chand has infused a diverse range of historical events in her stories. The latter, published by British company Harvill Secker in 2010, is titled A Different Sky. It follows three families navigating the chaotic Japanese Occupation as well as the the communist riots of the post-war period.

Jaswal has also landed a film deal for the book: movie rights have been sold to Ridley Scott's production company, Scott Free Productions, and Film4.

Her other novels include Inheritance and Sugarbread, both set in Singapore. Both tackle social issues such as struggling with mental health and racism, while situating the characters within the Sikh community. While both have been published locally by Epigram Books, Inheritance was first published by Australian press Sleepers Publishing. It has also been published in the UK under Epigram's UK arm.

A series about a food-loving Peranakan sleuth named Aunty Lee is one of veteran writer Yu's many literary pursuits.

Both a playwright and an author of novels, Yu, 55, is a household name in the local scene. Outside of Singapore, she has had her Aunty Lee series published by HarperCollins. It has been released in both the UK and the US, with imprint William Morrow publishing the series in the US.

Her latest work is The Frangipani Tree Mystery, released in Britain in June this year. Set in Singapore in 1936, the book's protagonist is young Peranakan detective Su Lin, who helps the Britain-born Chief Inspector solve a series of murders.

At 23, Tan had her first novel published by Michael Joseph, an imprint of the Penguin group. Titled Foreign Bodies, the book explores the issue of child abuse. It was published in 1997 and won both local and international acclaim. As part of her two-book contract with Penguin, Tan's second novel Mammon Inc. was released in 2001.

Besides her literary work, Tan is also a freelance journalist, copywriter and editor. "Publishing with an international house gives an author instant credibility among the local literati," she wrote in the Business Times in 2001, reflecting on the success of her debut novel.

It is hard to think of local literature scene without Lim's name being mentioned. Lim, 68, is a veteran of the local scene. Her work has been published both in Singapore and overseas. For instance, her 1992 Singapore Literature Prize-winning novel, Fistful Of Colour, was translated and published in Macedonia.

More recently, her 2013 novel The River's Song, which was previously published in Britain, was released in India earlier this year.

Acquired by Anita Nair's publishing house Attic Books, the book charts the transformation of the Singapore River. It was also translated into Tamil and Malyalam for its Indian release. The National Arts Council (NAC) also made a deal for the book to be translated into Filipino, and taught in schools in the Philippines.

The poet has won acclaim for his work both locally and overseas. Koh's fifth collection of poetry, Steep Tea, was published by British publisher Carcanet Press in 2015. It then went on to be included in The Financial Times' Best Poetry of 2015 list.

Steep Tea, while covering some quintessentially Singaporean experiences - the poem Attribution is about copying and regurgitating model answers in school - is also about Koh finding his "rightful place in New York", where he is now based. "I couldn't have written Steep Tea without moving to the US to come out as a poet and a gay man," he told The Straits Times in 2015.

His poems have also been translated into Japanese, Chinese, Vietnamese, Russian and Latvian.