SINGAPORE - Two months after closing its last outlet in Singapore, MPH Bookstores will make a comeback with a new concept store at SingPost Centre in Paya Lebar, expected to open in November.

Besides books, the 1,900 sq ft store will sell stationery and gifts from international lifestyle brands, snacks and beverages as well as offer services such as printing, computer rental and courier drop-off. In comparison, MPH's Raffles City outlet was 6,500 sq ft when it opened on the chain's centenary in 2006.

MPH had shut its outlets at Raffles City on July 28 and at Parkway Parade on Sept 1, citing high rental costs.

The closures were part of a wave that has hit nearly every major bookstore chain in Singapore this year, including Books Kinokuniya at Liang Court in April, Popular at Thomson Plaza in June and Times at Centrepoint today.

MPH group chief executive Donald Kee told The Straits Times: "We would like to reassure all our customers and business partners that MPH is still very much in the game. We still believe in the retailing of books and our passion in curating the best selection for our customers is still intact.

"The closure of (the Raffles City and Parkway Parade) stores was solely due to commercial reasons. We are moving forward to establish new concepts by adopting new retail technologies."

The stores here are operated by MPH Bookstores Singapore, a local entity owned by a Malaysian holding company. 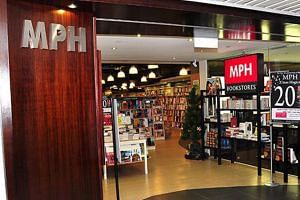 Mr Kee estimated that 55 per cent of the new store's offerings would be books and magazines, while lifestyle products, snacks, beverages and services would make up the remainder.

It is intended to be the first in a series of small concept stores in Singapore, though Mr Kee did not disclose where and when the next outlets would open as tenancy negotiations are still underway.

"With the new approach, we hope to re-establish MPH's brand in Singapore and excite our current as well as new customers," he said.