SINGAPORE - Construction has begun on the new $30-million waterfront theatre at the Esplanade - Theatres on the Bay, which is slated to open in the second half of 2021.

Minister for Culture, Community and Youth Grace Fu, who was the guest of honour at the ground-breaking ceremony held on Tuesday morning (June 18), said the new 550-seat theatre comes in response to feedback about a gap in the arts landscape in Singapore.

She added that arts groups here want to develop performances beyond studio-sized shows, "but the leap from a 200- to 300-seater to a 1,000-seat theatre - let alone the Esplanade's almost 2,000-seat Theatre - may be too ambitious at one go".

Existing venues at the Esplanade include two spaces for concerts and performing arts that seat about 2,000 each, and studios that cater to just over 200 viewers.

In addition, the mid-sized theatre will have flexible seating, rather than the standard proscenium stage design, making it "a place where arts groups can create something new, create something interesting", said Ms Fu.

The new theatre will occupy a 3,000 sq m area along the Esplanade Waterfront and is being designed by a team led by local firm architects61. It will be named the Singtel Waterfront Theatre at Esplanade, to recognise the telco's $10 million donation for its construction.

The Ministry of Culture, Community and Youth also contributed an initial $10 million, which will go towards the theatre.

The Esplanade has raised about $1 million more through fund-raising activities such as backstage tours and gala events and is expected to raise the remaining $9 million. Donations are solicited through dollar-for-dollar matching programmes with private sponsors and other events. 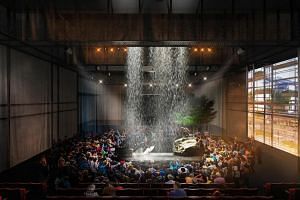 Esplanade chief executive officer Yvonne Tham noted that the new flexible-seat theatre is being designed for generations of artists to come. "That's why it can't have a form that's fixed because a 17-year-old artist could be making theatre in a form we can't imagine yet," she said.

Several representatives of arts groups at the ceremony noted that while there are existing mid-sized venues such as Victoria Theatre and the Drama Centre theatre, the new waterfront theatre was important in allowing more programming under the aegis of the Esplanade. The arts centre is known for supporting the creation of new work under festivals such as the annual Studios season for intimate work - many of these plays have won critical acclaim at the annual The Straits Times Life Theatre Awards.

Mr Terence Ho, executive director of the Singapore Chinese Orchestra and a Nominated Member of Parliament, said: "The significance of this theatre is that it's part of the Esplanade, an iconic arts centre, which will draw different audiences and can create different styles of programmes."

Ms Fu also noted that many young artists here had their start in non-ticketed, outreach events programmed by the Esplanade and that her ministry and the National Arts Council would continue to support ticketed and non-ticketed arts and cultural events.

In addition, the arts council will, over the next five years, commission more research into audiences for the arts, in order to understand how to build demand for the arts.

For example, a National Music Consumption survey will be conducted later this year, following the inaugural 2017 survey that identified trends, attitudes and perceptions of home-grown music in Singapore.

"The second survey will build on these findings to provide insights into new opportunities to support Singaporean music," Ms Fu said.