SINGAPORE - There are doorstoppers and then there is Ducks, Newburyport.

It is more than 1,020 pages long and most of that is a single run-on sentence.

"Writing this book nearly killed me," quips Lucy Ellmann, 62. It took her seven years of having no social life and working 12 to 14 hours a day.

While it was in its final revision, she fell and broke her right wrist.

"I think my body had had it with me writing all the time," says the right-handed author in an e-mail interview.

Born in the United States to eminent literary critics Richard and Mary Ellmann, she is now based in Edinburgh.

She has written seven novels - her fourth, Dot In The Universe (2003), was longlisted for the Orange Prize for Fiction - but none has met with the shock acclaim of Ducks, Newburyport, which was rejected by her regular publisher Bloomsbury and later picked up by tiny publishing house Galley Beggar Press.

What was her first reaction on being picked for the Booker?

"Existential dread. No, hilarity and gin and tonics for all.

"I'm just grateful to be on the shortlist - and the longlist. It's a real help to sales. I must admit it's fun to see photos of people reading the book on the New York subway."

Most of the novel is the internal monologue of an Ohio housewife, a mother of four who makes pies.

"I hope the book acts as a pie in the face to preconceptions about what fiction is, how it's constructed, what it's about and what it should be called," says Ellmann, who is married to writer Todd McEwen, with whom she has a daughter. 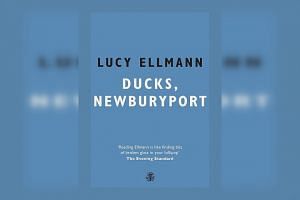 Booker 2019: Shortlist dominated by stories of, and by, women

Booker 2019: Girl, Woman, Other is a vivid tapestry of black women's lives

"Mothers are the centre of the universe and deserve more attention than they usually get."

The book is long, she says, because it has to be. "I wanted to blanket the reader in stuff, the stuff of American life. Anything shorter would be like offering someone a 10-inch square quilt. That's a cushion, not a blanket.

"I deliberated over everything that went in and where to put it, just like (Japanese tidying-up expert) Marie Kondo might suggest, vis-a-vis your belongings. Not on grounds of 'joy' in this case, but rhythm and relevance."

There is humour in the novel and rage too - against United States President Donald Trump, sexual harassment, the historical massacres of Native Americans and much more.

"Art is not therapy, it's just the best way to think about things," she says. "We do need to express our rage - in non-violent ways.

"I don't believe in being silent in the face of catastrophe."