Born in Amoy, China in 1917, he came to Singapore when he was 29. He had actually headed for Hong Kong first in 1945 after leaving China before coming to Singapore. There was good reason for him to come here: His art teacher at Xiamen Fine Art Academy, Lim Hak Tai, had founded the Nanyang Academy of Fine Art (Nafa) in Singapore. So he had a friend here.

Cheong taught at Nafa from 1947 to 1961 before becoming a full-time artist in his late 40s. By the time he took up his teaching post in Singapore, he had already proven his mettle as an artist, with his first solo exhibition held in 1942. 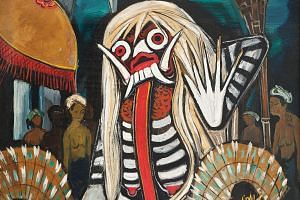 Once settled in Singapore, Cheong promptly went in search of an aesthetic that would suit his new homeland. Together with other pioneer artists Liu Kang, Chen Wen Hsi and Chen Chong Swee, he travelled to Bali on a landmark trip in 1952 that would shape what later became known as the Nanyang style of art.

While these artists were rooted in Chinese culture - utilising traditional materials such as Chinese inks and brushes - they were also influenced by Western styles of oil painting. They applied both sets of techniques to distinctly South-east Asian topics, creating distinctive works that melded Eastern and Western techniques to depict daily life in the tropics.

This is Cheong’s best known piece, which even non-art fans will recognise because it is featured on the back of the $50 note.

It has inspired a children’s book, Salted Fish, by Yeo Wei Wei and Ye Shufang, which tells the story of little girl called Lynn who visits the National Art Gallery with her favourite toy, Cotton Bunny.

It was also chosen by Hyflux executive chairman Olivia Lum as her pick for the National Gallery Singapore’s My Masterpiece series.

Besides travelling around the region as a young man, Cheong travelled extensively in Europe after he retired from teaching and spent a year in London in 1961. He was the first Singaporean artist to hold a solo show in the city.

He was awarded the Pingat Jasa Gemilang (Meritorious Service Medal) in 1962 for his contributions to Singapore art. The National Museum organised a retrospective of his works in 1983. But four months before the exhibition was to open, Cheong died of heart failure at the age of 66.