Budgets, timing as well as experiences are deciding factors on whether you should go for a hotel stay or set sail

Many hotels now offer no-contact staycation packages for those weary of being stuck at home, while Dream Cruises has been offering two-and three-night cruises to nowhere on its lone operating ship, the World Dream.

To help people understand the costs and benefits of each option, here are staycation rates from four major hotels - Marina Bay Sands, Singapore Marriott Tang Plaza Hotel, The Fullerton Singapore and Hilton Singapore - to compare their relative value against a cruise.

The average cost a night for the most basic staycation was $396, but prices varied significantly by hotel, room size and package level.

Dream Cruises offered an average of $488 a night on its cruises to nowhere.

Marina Bay Sands was one hotel charging more than a cruise, with its cheapest staycation package costing an average of $550 (for a two-night stay) from March through July.

Seasonality affected cruise tickets more than hotel rates. The average cost of a cruise to nowhere increased by 20 per cent between May and June - the school-holiday month - while staycation rates remained about the same.

Whether you sail or choose a staycation, going on weekdays may be wise. The hotel rates were 9 per cent cheaper for midweek check-ins than on weekends. Dream Cruises also charged 18 per cent less for midweek departures.

The decision between a staycation and a cruise with no stops comes down to two factors: the greater variety of activities on board a cruise ship versus the roomier, more comfortable environment of a hotel room.

But the comparison depended largely on the hotel and room size.

Also, staycations at Marriott and Marina Bay Sands cost more at the higher-room tiers than a Dream Cruises trip. 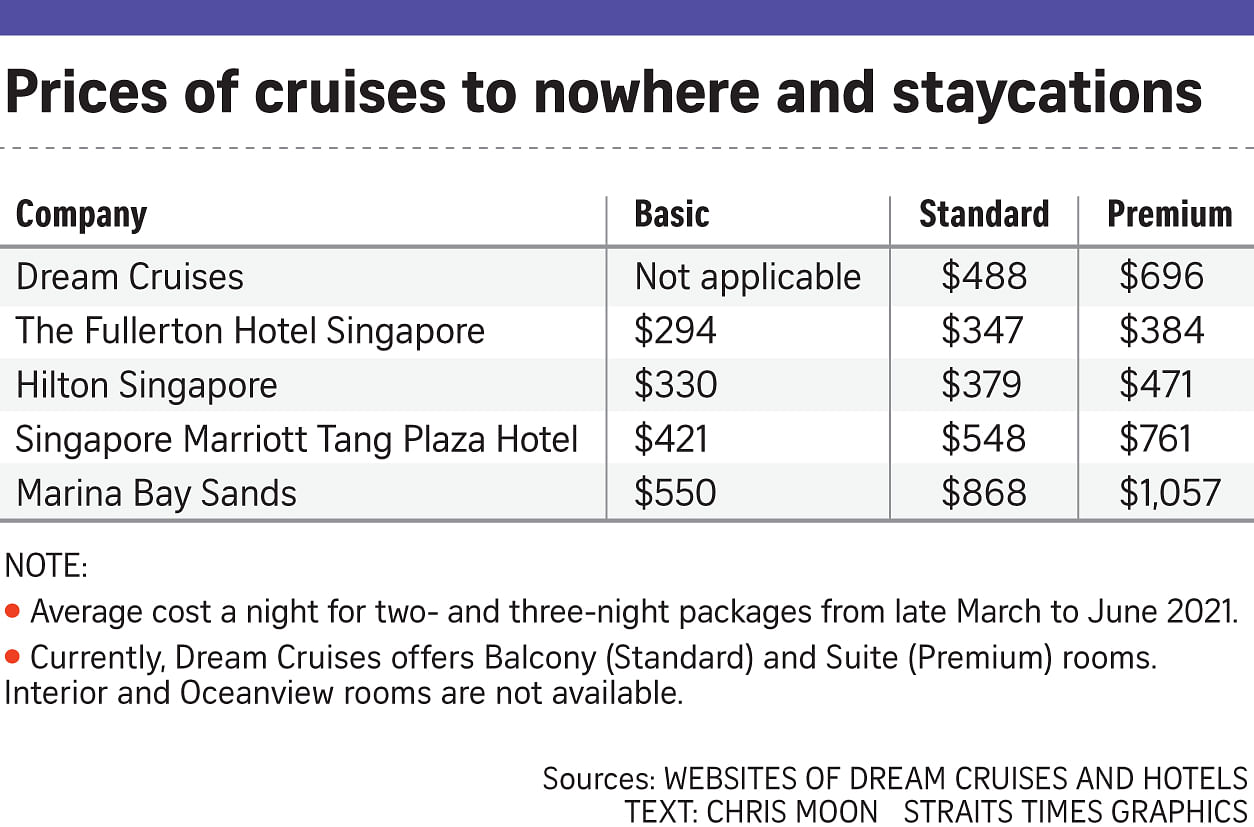 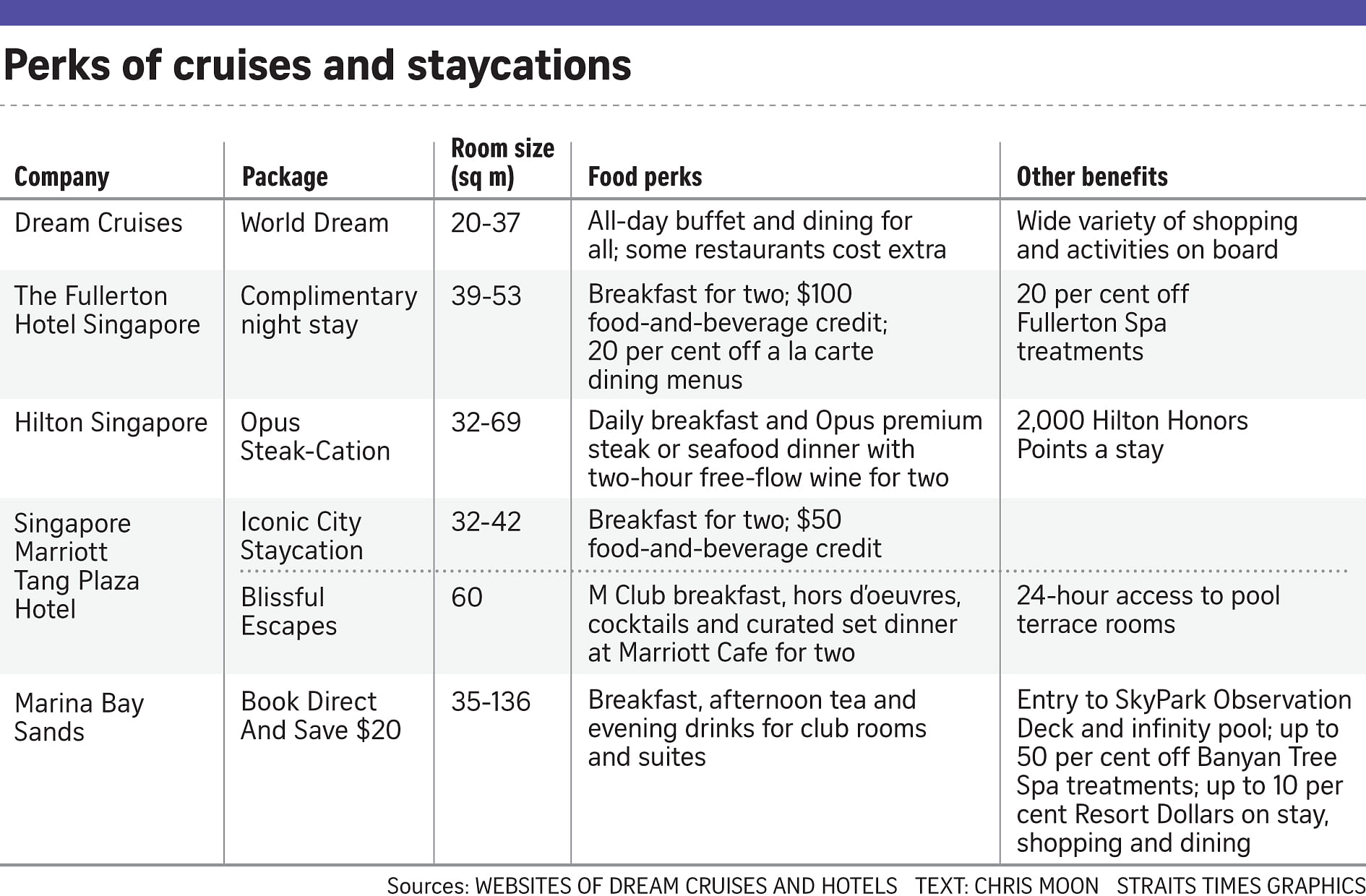 This was likely due to the fact that the packages included accommodation of a higher quality plus a number of unique perks, such as access to Marina Bay Sands' famed rooftop infinity pool or Marriott's menu of curated dinner experiences.

What also surprised was the affordability of staycation packages from The Fullerton, one of Singapore's landmark establishments.

Guests staying a night there received a second consecutive night free, making the hotel's staycation offer the best deal at each of the room tiers compared.

Thanks to the coronavirus, seasonality is not affecting the cost of travel quite the same as in previous years.

However, cruise ticket prices rose by nearly 20 per cent to an average of $555 a night in June, from $463 in May, according to findings.

Meanwhile, the staycation packages used for the comparison actually fell slightly on average for June.

One bright spot for frugal consumers was that both cruises and staycations were more affordable on days in the middle of the week rather than weekends.

Cruises leaving on Wednesdays cost an average of $427 a night, an 18 per cent saving versus cruises departing on Fridays or Sundays ($525).

Weekday savings on staycations varied by establishment, ranging from just 2 per cent lower at Hilton to 25 per cent off at The Fullerton, but 9 per cent lower overall.

A look at the perks included in each package showed that cruises to nowhere offered decent all-round value for families needing a variety of activities, while staycations seemed best for couples seeking to indulge in fine dining and in-suite comforts (see table on "Perks of cruises and staycations").

Most hotels offer, at the minimum, breakfast for two, with some throwing in food-and-beverage credits between $50 and $100.

A few of the more creative packages by Hilton and Marriott also included special dinner experiences, while others tagged on significant discounts on treatments from the hotel's attached spas.

The major difference between a hotel stay and a trip on a cruise ship may be the most obvious: Cabins on cruise ships are far smaller than hotel rooms, which means passengers must get out of their cabins and find things to do on board to get their money's worth.

The cost of the ticket is tied up in enjoying the ocean view, seeing shows and visiting shops and restaurants.

The variety available in cruises to nowhere matches up favourably to staycation packages, which in some cases seemed to imply that guests would not be allowed to occupy their hotel rooms for a continuous 24 hours.

In such cases, you would be forced to find other activities in the city itself, an experience few people would consider a true "getaway".

But if you are willing to put down any amount of money, which service offers the best possible experience?

In this scenario, the selection of suites at the top-end of Dream Cruises' offerings become more tempting. Massive suites like the Palace Villa combine the unique ocean view of a cruise with luxury that almost matches the best hotels on shore.

The most expensive hotel in the comparison was Marina Bay Sands, a familiar part of Singapore's skyline and hospitality industry.

Despite costing 75 per cent more a night than Dream Cruises at the highest level, the room quality and size appeared to be only slightly superior to the top-end suite on board World Dream.

Moreover, the hotel's main draw - its infinity pool - was available only for an hour and 15 minutes a day even with the most expensive suite, thanks to the need for coronavirus precautions. This was a major downside of the Marina Bay Sands staycation package.

If you have the luxury of choosing among options at this level, the deciding factor will be the time you have available.

While the cruise offers far more variety in terms of activities (along with a much smaller passenger population, thanks to distancing requirements), you will have only three days at most to do everything you would like.

In this case, Marina Bay Sands is a good option for those seeking simple relaxation, while cruises to nowhere are suitable for people who need to stretch their legs through a variety of activities.

IN A NUTSHELL: CRUISE OR STAYCATION?

One hard truth in the current pandemic situation is that the cruise to nowhere is a limited version of the experiences cruises can deliver in normal times.

In contrast, staycation packages represent an expansion of typical hotel experiences made necessary by the shutdown of regular business. Rather than simply housing Singapore-bound tourists, hotels have had to pivot towards becoming attractions themselves.

Given this convergence of quality - with cruises having become less interesting and hotel stays more interesting - it is plausible to claim that staycations offer better value for the money.

But the answer of whether to cruise or to go for a staycation boils down to the experiences you want.

Dream Cruises offers a good variety of family-friendly on-board activities such as a virtual-reality experience, performances and a range of dining options.

Staycations mostly appear to be geared towards couples seeking a relaxing stay and memorable meals.

Ultimately, both cruises and staycations offer a rare chance to escape the confines of your home at a time when getting away is extremely difficult.

They are also rare opportunities to use travel rewards you have accumulated through your credit card or earn more perks.

Whether you prefer to catch a whiff of the ocean breeze on board a short cruise or opt for more spacious luxury in a hotel, the current difficulties faced by the hospitality industry offer a unique opportunity to punctuate your day-to-day life with some variety.

• The writer is a product manager at ValueChampion, a consumer research and personal finance comparison firm.

A version of this article appeared in the print edition of The Straits Times on April 13, 2021, with the headline 'A staycation or cruise to nowhere?'. Subscribe
Topics:
More
Whatsapp Linkedin FB Messenger Telegram Reddit WeChat Pinterest Print Purchase Article Copy permalink