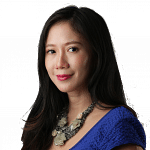 "My best friend and I went to Delhi and trekked the Himalayas. I had never been out of France before and was blown away by the culture, vibrancy and spirituality," she says. "That trip changed my life forever."

From that moment on, Pascal knew she wanted to relocate to Asia. Serendipity took her to Bali, Indonesia, in 2002, where she still lives today - close to the black sand beaches in a fishing village north of Canggu. She is married to Australian Matt Neville, a photographer, and they have four-year-old twins, a boy and a girl.

"Sometimes, I feel like I'm missing out because my husband spends way more time with the kids than I do," the 43-year-old admits. "I suppose it's because the brand is my first baby."

She is referring to her eponymous label, which she founded in Bali in 2004.

Known for its feminine aesthetic and detailed craftsmanship, the brand boasts sustainability as a core tenet. The designer uses only natural, organic fabrics like cotton and silk whenever possible.

But it was only late last year, after one of her dresses - a flirty, frilly lavender number from her Spring Summer 2021 collection - appeared on the second season of Netflix's hit series, Emily In Paris (2020 to present), that the indie label was catapulted into the global spotlight.

"We were all shocked and surprised by the attention the dress got," she says. "It taught me to never underestimate the power of celebrity."

It is a Friday morning and Pascal is impeccably dressed in one of her own designs for this Zoom interview.

She has come a long way since she was a petite enfant, trawling the textile shops in the Grands Boulevards of Paris with her late grandmother Josette.

"My grandma introduced me to art and clothes-making," she recalls. "I was living on the outskirts of Paris, and she would come drive me to Paris and take me to museums and boutiques every Wednesday. She loved couture, so she'd buy fabrics and make her own jackets and dresses."

Pascal began seriously pursuing her own dreams of becoming a couturiere when she was a fashion student at the Ecole nationale superieure des Arts Decoratifs (Ensad), an art and design university in the French capital. Her first creation was a cropped jacket.

"When I discovered I could make my own clothes, anything I wanted to wear, I was hooked." she says.

Today, she has four resort boutiques in Bali, a flagship store in Sydney, Australia, and a presence in more than 80 countries worldwide, including well-known department stores like Galeries Lafayette and Neiman Marcus.

More On This Topic
Style News: The Emily In Paris Dress in S'pore, new home-grown beauty brand Aspurely
Is that Emily in Pasir Ris, Potong Pasir and Perlis?

The path to success has not always been smooth-sailing, especially during the pandemic.

"We were focused on building our brand in Bali," she says. "But the pandemic happened and all these other Bali-based resortwear labels began closing down because there were no tourists. It was a huge wake-up call for us, so we took the time we had to pivot, rebrand and expand our international presence."

Things were plodding along until one day last year, when legendary American costume designer and stylist Patricia Field casually strode into a showroom in Paris and picked out a dress for a television series she was working on.

"We didn't think too much of it until the poster came out," Pascal says.

The promotional poster for the second season of Emily In Paris caused a ripple of excitement worldwide. Sure, fans wanted to know what other troubles the title character, a culturally tone-deaf American played by actress Lily Collins, would get into in the City of Lights, but more than that, they wanted to know everything about the dress she had on.

"I got a call from one of the showroom staff saying, 'Oh my god, our botanic dress has made it onto the posters.' A few days later, it appeared on huge billboards in Paris and pretty soon, every magazine.

"People reposted the dress and tagged us, and all of this led to a sudden spike in traffic to our website," Pascal says.

"The Emily in Paris Dress" - as it is now known among fashionistas - sold out in a day. It is retailing in Singapore at $899 at multi-label boutique SocietyA in Ngee Ann City, where the brand is carried.

"We don't normally mass-produce our items, but we had to make a special exception for this dress," Pascal says.

"We ordered extra fabric, but that wasn't enough. Thankfully we had some fabric left and we worked as fast as we could to fulfil the demand."

She admits that something like this would not have been possible 15 years ago.

"It was difficult to be taken seriously when you're so far removed from the world's fashion capitals. But with technology, there are no more boundaries and people are starting to see us less as resortwear and more as an international brand," she says.

While Pascal "secretly loves" the series, she confesses that the show's flamboyant OOTDs do not reflect typical Parisian style: "I love the fashion in the series, but Parisians tend to opt for clothes that are classic and elegant, rather than something loud and colourful."

These days, her label churns out modern, clean pieces with a "balance".

"I like mixing feminine styles with a more structured masculine silhouette to make it more contemporary," she says.

Her muse for the latest season is 77-year-old Nicaraguan-American socialite Bianca Jagger, a former actress and the ex-wife of Mick Jagger, the frontman of rock band The Rolling Stones.

"I've been watching a lot of documentaries on Studio 54 and Bianca Jagger is very sophisticated and laid-back. She has a certain je ne sais quoi," Pascal says.

Studio 54 was an iconic nightclub in New York frequented by celebrities such as the Jaggers, actress Farrah Fawcett, artist Andy Warhol and fashion designer Karl Lagerfeld during its heyday in the swinging seventies.

Among Pascal's future plans is a trip to Singapore.

"I've been there plenty of times to renew my visa. I love shopping and eating as well as visiting its beautiful parks. Now that (borders have reopened), I hope to visit Singapore soon to meet my customers."

More On This Topic
On The Streets: From nostalgic creations to head-turning numbers
Fashion meets heart for visionaries in the fashion world

Magali Pascal shares some of her favourite hangouts in Bali.

Potato Head in Seminyak "offers something for everyone, with a pool bar, great restaurants, a library and more".

A smaller beach club is Ulu Cliffhouse in Uluwatu. "The views are amazing and it recently opened stunning hotel rooms."

The recently opened Santanera in Canggu dishes out South American fusion fare. "Its interior is different from what you usually see in Bali. You almost feel like you're in the city."

For fine-dining Indonesian food in an intimate setting, Pascal suggests Sangsaka in Kerobokan. "My husband and I love going there for date night."

For brunch, she likes Woods, which sits along a quiet road in one of the smaller villages outside Canggu, "a stunning spot for a brunch with perfect food presentation". She adds: "It has live jazz on Sundays, so I love going there for a long brunch."

Another favourite brunch joint is Apurva Kempinski in Nusa Dua. "Surrounded by beautiful white sand beaches and calm waters, the restaurants here have incredible service and delicious food. I head here when I want to experience some Bali luxury."

Spring Spa is Pascal's go-to for a hair treatment or massage. "The technicians are some of the best on the island and the spa also has a wide selection of hair products that you can't get anywhere else in Bali."

She also likes Bodyworks. "Its new location in Seminyak looks straight out of a movie. You feel relaxed as soon as you step inside."