A key issue that motorists always bring up in the war against cyclists is: Why are cyclists allowed on the roads when they do not pay road tax?

The term "road tax" should not be taken literally, as it does not mean that the tax dollars collected are being used to build and maintain roads, nor does it mean that only motorists who pay road tax are allowed to use the roads.

If this is the case, all pedestrians using the road crossings should be paying road tax too. 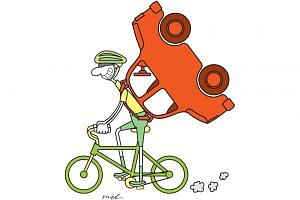 As the Land Transport Authority (LTA) clarified in 2013: "Public roads are intended to be used by all road users, including cyclists and pedestrians. They are built and maintained using public funds collected from general taxes, including those who do not use motorised vehicles."

Furthermore, it can be clearly seen on the LTA's website that road tax is calculated based on a vehicle's engine capacity or power rating. These values are directly or indirectly linked to the amount of emissions produced by each vehicle type.

A bicycle is human-powered, and does not emit any form of emissions. As such, cyclists are exempt from paying any road tax and are fully entitled to use the roads.

Motorists should understand the correct purpose of paying road tax instead of using it as an excuse to run cyclists off the roads.

Perhaps the LTA could consider changing the term "road tax" to something else, such as "emissions tax" or "environment tax" in order to correct the misconception.

Let us all be gracious road users and share the roads responsibly to make Singapore a better place for commuting for one and all.