SINGAPORE - An American company that provides co-working spaces has officially opened its new "lab" in Singapore.

WeWork said on Friday (Nov 23) that the WeWork Lab at its City House location in Robinson Road can accommodate 50 members.

The labs, which are the company's innovation platform for early-stage start-ups, give members access to custom programming, mentorships, investments, and educational resources to grow their business.

This is the latest co-working concept to be launched here, where co-working spaces have been growing in popularity.

WeWork has nine co-working spaces here, in areas such as Suntec Tower, Anson Road and Cross Street, and 335 locations in 83 cities worldwide.

Mr Adrian Tan, head of Labs at WeWork Southeast Asia, said: "With the South-east Asia region experiencing unprecedented growth in terms of commercial innovation and investments, there are still key dynamics at play that remain a puzzle to outsiders due to its cultural differences, nuances in consumer behaviours and rapid pace of change. 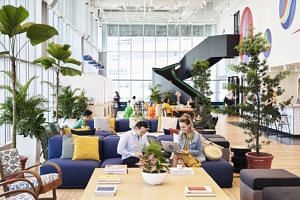 "With WeWork Labs, we can help to nurture and unlock the potential of early stage start-ups by giving them key resources to take their businesses and ideas to a global scale," he added.

Singapore is suitable for such a concept because it can also be a hub for South-east Asia.

The WeWork Labs concept was launched in early 2018 with 28 locations in 16 cities in the United States, Korea, Brazil, Israel, India and elsewhere. The labs have supported over 1,000 start-ups.

Each lab location has a manager who acts as a collaborator and innovator who can provide educational resources during roundtables, lecture series and one-on-one meetings.

Members can explore topics like accounting, marketing, hiring and even how to pitch to future investors.

WeWork Labs piloted its concept for the first cohort of start-ups here in September. These included graduates of accelerator programmes and non-profit organisations. Eight start-ups participated in the pilot, including BlockPunk, which is building a next-generation anime studio.

Chief executive and co-founder Julian Lai-Hung said: "Having graduated from the Entrepreneur First Singapore incubator, we wanted to find a similar start-up-friendly culture and global community. WeWork Labs provided this and also helped in attracting new hires and kept the team happy, collaborative and productive."