Net profit for the developer and hotel operator shot up 48.1 per cent to S$195.4 million from the previous year's S$131.9 million.

Before fair-value and other gains, group pre-tax profit was 7 per cent lower at S$141.8 million, as revenue fell 19.7 per cent to S$512.3 million from the preceding year.

This was due to the absence of contribution from Principal Garden which obtained its temporary occupation permit last December, and lower progressive revenue recognition from The Clement Canopy and Botanique at Bartley. These two projects were completed in March and April 2019 respectively.

Revenue from property investments rose 3 per cent to S$137.8 million, due to contributions by UIC Building and 72 Christie Street in Sydney, acquired in December.

Revenue from hotel ownership and operations was down 3 per cent to S$151.3 million, mainly from lower occupancies and room rates at Marina Mandarin and PARKROYAL Darling Harbour, as well as ongoing refurbishments at PARKROYAL on Kitchener Road.

Finance expenses rose 28 per cent to S$29 million as the group borrowed more for its purchase of Marina Mandarin Singapore and parts of the Marina Square complex.

For the first half of the fiscal year, net profit rose 29 per cent, driven by higher attributable fair-value gains of S$103.7 million. 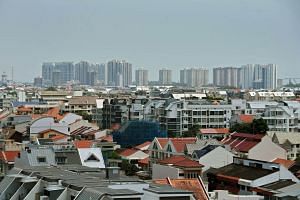 UOL said that prices for new private homes in Singapore are expected to remain relatively stable.

Group chief executive Liam Wee Sin said: "In the first half of 2019, the take-up for new projects was 6 per cent higher than the preceding year, notwithstanding the cooling measures introduced on 6 July 2018. We see resilience in the market and potential further upside for selected projects with strong location and product attributes."

As for office rents, they should be helped by steady demand and tightening vacancy, while retail rents will remain under pressure amid "tepid economic growth".

The group addded: "In the United Kingdom, economic and political uncertainties from Brexit continue to weigh on the London residential property market. Leasing activities remain resilient in Midtown where the group owns two commercial properties."

The group plans to launch Avenue South Residence by the end of this month.