SINGAPORE - Start-ups here closed 353 financing deals worth US$10.5 billion last year, an increase from the 160 deals worth US$0.8 billion in 2012, according to Enterprise Singapore (ESG).

The agency released the figures as it launched the third edition of Slingshot, an international start-up competition on Friday (April 26).

Assistant chief executive Edwin Chow said the agency will continue working with overseas and local partners, including public agencies, this year to grow the start-up scene here, adding that more than 1,160 start-ups benefited from the agency's programmes last year.

An example is a programme called Partnerships for Capability Transformation through Government Lead Demand, or Gov-PACT, where public agencies initiate innovative projects by stating the challenges they face, allowing start-ups to propose solutions.

An $80 million kitty was announced for the Gov-PACT initiative during Budget 2017 to drive innovation through government-led demand. 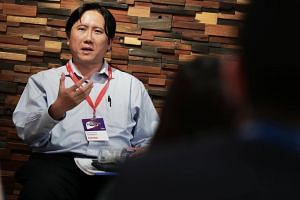 The Housing Board, for example, launched the Cool Ideas Enterprise last year to encourage entrepreneurs or companies to submit ideas on how to improve public housing estates as part of an open innovation programme.

Initial ideas included a green earth-retaining system developed by the Housing Board and Nanyang Technological University that prevents slope failure due to rainfall and a nanogel that can help more plant types to grow in HDB estates.

Mr Chow said: "Targeted platforms for start-ups to connect with investors and customers serve as valuable opportunities for start-ups to access resources such as financing, and opens doors to co-innovation with leading corporates."

The ESG has also appointed 17 more mentors to provide help such as start-up capital to more first-time entrepreneurs.

The total number of mentors under its Startup SG Founder programme is now 45, and about 200 start-ups will benefit from the programme this year, the agency said.

Additions include the Institute of Technical Education, the Singapore University of Social Sciences and Heritas Capital Management.

Mr Chow said that the ESG and the Economic Development Board are strengthening the Republic's connections to major innovation hubs around the world by setting up centres in four more cities, though it did not provide their locations.

Centres set up last year were in Munich and Berlin in Germany, Suzhou in China, Paris and Tokyo.

ESG is also working with the central bank to help start-ups secure investments and funding through curated deals, the agency added.

Mr Chow said that start-ups here capitalise on the rise of Asia, noting that Asia will contribute to half of the global gross domestic product by 2050.

He added that growth is particularly prominent in India, China and Asean countries, as their middle classes continue to grow, spurring spending and consumption.

"We will look at initiatives related to growing talent and later-stage financing to build a more robust system," he said.