SINGAPORE - A trial said to be a world-first to use a drone to deliver mail has been completed by SingPost and the the Infocomm Development Authority of Singapore (IDA).

In a statement to the Singapore Exchange, SingPost said a letter and a T-shirt in a parcel were transported by drone from Lorong Halus to Pulau Ubin - a distance of about 2km, and taking about five minutes.

However, in its statement, SingPost said: "This is the first time in the world a postal service has successfully used an UAV for point-to-point recipient-authenticated mail delivery."

IDA worked on the drone so it could be used by SingPost. The drone was built using the Pixhawk Steadidrone platform by IDA Labs to meet the new conceptual delivery platform from SingPost, and tailored for use in a challenging environment like Singapore.

Ms Jacqueline Poh, IDA managing director, said: "The successful conclusion of this trial shows how SingPost is thinking out of the box and its willingness to expand its traditional mail delivery model in innovative ways.

"Although it will be a while before it is viable for drone mail delivery to take off in Singapore, taking into consideration commercial and safety factors, this first step by SingPost and IDA demonstrates what Singapore is trying out with our Smart Nation vision - to have the various parts of our ecosystem collaborate, experiment with new ways of doing things, and in the process, literally aim for the sky with new technology."

SingPost said the drone is equipped with enhanced safety features, and is complemented with a prototype app designed with security and verification features that ensures the mail reaches its intended recipient.

It has the capacity to carry a payload of up to half a kilogramme, fly at a height of up to 45m and travel a distance of 2.3km. The focus of the flight was to test the drone technology and safety boundaries.

"We are seeing success in our digital transformation which did not happen overnight. Our success is made possible through collaborations with industry experts and our business partners. Now, we want to make innovation more accessible and bring more tangible benefits to our customers and consumers." 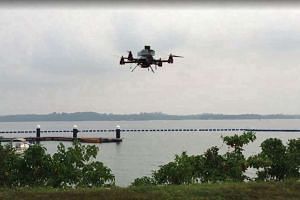 Take our quiz: The dos and don'ts of flying drones in Singapore

He said the use of drones offered "immense potential" in the burgeoning market of e-commerce delivery.

The e-commerce market in the Asia Pacific is expected to reach US$175 billion by 2016. SingPost said it is equipped to handle postal and non-postal delivery, customs clearance and eCommerce warehousing, and that it is emerging as a market leader in South-east Asia.