SINGAPORE - The iconic Raffles Hotel will be reopening in the second half of next year, having been undergoing restoration works since February this year.

When it reopens, it will have three new suite categories - Residence Suites, Promenade Suites and Studio Suites - and the total suite count will increase from the current 103 to 115.

One of the few remaining 19th-century hotels left in the world, ownership of the Beach Road property changed hands in December 2015 when European hotel operator Accor SA announced it was buying the company that owned the luxury Fairmont, Raffles and Swissotel brands for an estimated US$2.9 billion (S$4 billion).

Here is a look back at who has owned Raffles Hotel through the years.

1887 - Syed Ahmed's son Syed Mohamed takes over the estate and expands it. With the help of the four Sarkies brothers from Armenia, he converts the property into Raffles Hotel. It offers 10 rooms in an old bungalow-style building overlooking the beach and the South China Sea. The Sarkies brothers manage the hotel under a lease from Syed Mohamed. The hotel soon becomes the most fabled hotel in the Far East and a favourite watering hole of literary figures including Somerset Maugham and Rudyard Kipling.

1926 - The Sarkies secure a 70-year lease of tenure from the Alsagoffs but this was in effect for only six years as the Sarkies brothers went bankrupt when the Great Depression started in the early 1930s.

1931 - A bankruptcy case is filed against Raffles Hotel, eventually resulting in the Sarkies family losing control of their hotels in Singapore and Penang.

1933 - A solution to save Raffles Hotel comes only two years later, on Feb 28, 1933, with the formation of a new firm, Raffles Hotel Limited, which acquires and incorporates the historic hotel and its land.

1961 - Alsagoff patriarch Syed Ahmed had stated in his will that none of his properties could be sold until 20 years after the death of his last surviving child. This date did not arrive until 1961. His youngest daughter, Sherriffa Bahia Alsagoff, died in 1941.The Alsagoff property is put up for auction in 1961.

1972 - Raffles Hotel is sold to the Development Bank of Singapore.

1988 - OCBC and DBS tie up to incorporate of Raffles Hotel (1886) Pte Ltd to undertake the redevelopment of the hotel.

1995 - Raffles Holdings (1995) Pte Ltd is formed as the vehicle for the listing of DBS Land's hotel and resort business. 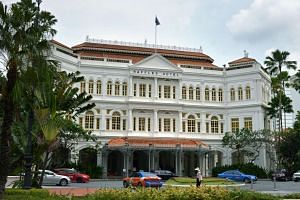 Accor to buy owner of Fairmont, Raffles and Swissotel brands for US$2.9 billion

Meanwhile, Kingdom Holding sells a part of its stake in FRHI to the Ontario Municipal Employee Retirement System (OMERS) in 2006.

2010 - Qatari Diar, the principal real estate entity of the Qatar Investment Authority, injects US$467 million into Fairmont Raffles in exchange for a 40 per cent stake in the hotel chain operator. It also buys Raffles Hotel from the group for US$275 million. The terms of the sale of the hotel include a long-term management contract allowing Fairmont Raffles to continue running the Singaporean landmark for the foreseeable future.

2016 - It is announced in October that the hotel would be undergoing restoration works the following year, more than 25 years after its last makeover.

2017 - A careful restoration process, which will be done in phases, begins in February.