SINGAPORE (BLOOMBERG) - Singapore says it has an understanding with the United States that the city state doesn't take advantage of privileges that come with "developing country" status in the World Trade Organisation.

In response to a tweet last week from US President Donald Trump accusing countries of abusing that status, and ordering his top trade negotiator to take action, Singapore Minister for Trade and Industry Chan Chun Sing said his Government had never taken advantage of such benefits.

"They're not asking us to change the developing-country status," Mr Chan said in an interview with Bloomberg on Thursday (Aug 1). "They are asking whether we will forgo the SDT privileges, which we have never availed ourselves to in the first place, so it's a non-issue."

He was referring to the WTO's "special and differential treatment" provisions. WTO privileges for developing economies include longer transition periods for implementing trade agreements, and protection against emergency import restrictions imposed by developed nations.

"We have always said that any privileges should be based on the circumstances rather than a uni-dimensional assessment of a country's status, like GDP or GDP per capita," he said.

Mr Chan said a recent letter from US Trade Representative Robert Lighthizer showed the US understood that Singapore retained the label but did not use the benefits. He did not offer more details of the letter.

Commenting on the trade war between US and China, Mr Chan said: "They are quarrelling but they are not quarrelling with us."

Trade tensions have weighed on the economic outlook for export-reliant Singapore and other regional economies, but Mr Chan told Bloomberg Television's Haslinda Amin he is "quietly confident" about the city-state's outlook. Despite "short-term gyrations" in output, the Government doesn't currently expect a recession, he said. 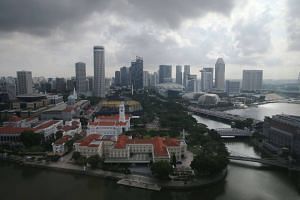 "At this point in time, I don't think that we are looking at a recession just yet," Mr Chan said. "The Government will be ready to step in and help our companies and business adjust."

Singapore's economy has shown some cracks after enjoying relative resilience earlier this year. The economy suffered its worst quarterly contraction in almost seven years during the three months ending in June, raising the prospect of a possible recession. The government this month is set to revise its 1.5 per cent to 2.5 per cent forecast range for 2019 economic growth.

Mr Chan sees Singapore's labour market holding steady for now despite the global headwinds. Information, communications and other service jobs are holding up, while the manufacturing sector has slowed and could show some spillover effects, he said.

The Government's focus is on the long term, including helping workers gain new skills to spur mobility between sectors and attract skilled talent. In that vein, the Economic Development Board and Enterprise Singapore this week announced a pilot programme to facilitate foreign-worker passes in high-skilled technology roles, while pushing to upgrade local workers' skills.

Mr Chan said the Government is prepared to extend the programme "beyond the deep tech ecosystem, to other areas". Companies had been calling for help in facilitating hiring of foreign workers, charging that existing conditions were too tight.

"We will always constantly push ourselves to tighten our belt" on lower- and mid-skilled workers in order to be "more manpower-lean", Mr Chan said. "But when it comes to global top-tier talent, nobody has enough."

Mr Chan noted that Singapore still has a strong pipeline of incoming investment - including deals with the likes of Exxon Mobil and GlaxoSmithKline - as big companies seek a "safe harbour for talent and their intellectual property protection".

"I think Singapore provides just such a base for that in the region," he added.