KSH Holdings said on Thursday (May 25) that the JV firm intends to apply for the grant of a fresh 99-year lease for the property and to redevelop the site.

"An estimated differential premium of S$208 million is payable to the State for the top-up of the lease and for the development of the site to a gross plot ratio of 2.8," it noted in a stock exchange filing. 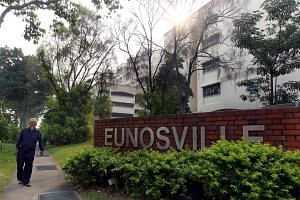 Rio Casa in Hougang Avenue 7 comprises seven blocks of 286 apartment and maisonette units. It has a site area of 36,811.1 square metres.

Under the Master Plan 2014, the site is zoned for residential use with a gross plot ratio of 2.8. This works out to a maximum permissible gross floor area of about 1.1 million square feet.

KSH Holdings, which has a 35 per cent stake in the JV, said it will fund its portion of the cost of the purchase by internal resources and bank borrowings.

Oxley Holdings holds a 35 per cent interest, Lian Beng Group at 20 per cent and Apricot Capital at 10 per cent.

Brisk new home sales and the recovering sentiment in the residential property market have fueled demand for development sites among developers.

As a result, analysts expect the collective sale market, which saw a resurgence in 2016, to remain active this year.

The first en bloc transaction this year - also marketed by Knight Frank - was One Tree Hill Gardens that was sold for S$65 million or about S$1,664 per sq ft to a unit of Lum Chang Group.

Another en bloc tender for 330-unit Eunosville - also an ex-HUDC estate - will close on May 31 at 3pm.

Owners at Eunosville in Sims Avenue expect offers of between S$643 million and S$653 million, which translates to about S$780 to S$790 psf per plot ratio.