SINGAPORE - The labour market improved on several fronts over the whole of last year, with retrenchments down to the lowest level since 2011.

Total employment growth last year was the highest since 2014, with an increase of 38,300 people with jobs. This was a reversal from 2017, when the size of the workforce shrank.

However, this was mainly thanks to the good performance in the first nine months of the year, according to the latest data from the Manpower Ministry (MOM) released on Thursday (March 14).

In the fourth quarter, total employment grew at a slower pace, and there was an uptick in the seasonally-adjusted resident unemployment and long-term unemployment rates compared with the previous quarter.

While fewer locals were retrenched, a rising proportion were professionals, managers, executives and technicians (PMETs). They made up 75.8 per cent of local retrenchments last year, up from 72 per cent in 2017 and significantly higher than their share of the local workforce at around 57 per cent. 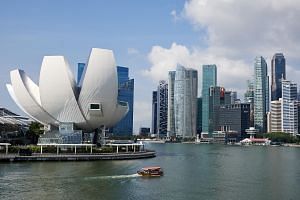 Let's talk about a living wage: Singapore should consider a society-wide approach to raising low wages

The ministry said in its report that this was because PMETs' share in the workforce has risen, and retrenchments were occurring mainly in higher-skilled industries.

The share of residents who were unemployed for at least 25 weeks was down slightly at 0.7 per cent, compared with 0.8 per cent in 2017.

Of the additional 38,300 more employed people last year, Singaporeans and PRs accounted for 27,400, more than double the 10,900 for foreigners, excluding maids.

All of the employment growth came from the services sector, which added a net 47,800 workers, excluding maids.

The majority, or 65 per cent, of these workers were Singaporeans and permanent residents. They joined mainly the health and social services, transportation and storage, financial services, information and communications and professional services industries.

The number of workers in manufacturing and construction continued to fall, for the fifth and third consecutive years respectively.

Growth in the foreign workforce came mostly from S Pass holders - mid-skilled workers earning at least $2,300 a month. There were 11,000 more S Pass holders employed here last year whereas there were fewer Employment Pass (EP) holders as a result of the raising of the qualifying salary in January 2017. Over the last two years, the number of EP holders fell by 6,400, said the MOM in a statement.

The minimum qualifying salary for an EP holder is $3,600.

Meanwhile, labour productivity, measured as real value-added per actual hour worked, grew by 3.7 per cent last year, slowing from the 4.9 per cent growth in 2017.

On a quarterly basis, the share of locals who found work within six months of being retrenched improved in the fourth quarter of last year, to 64 per cent, up from 62 per cent who found work in the third quarter.

Looking ahead, the ministry said the hiring outlook is positive for the construction sector, which saw a pickup in contracts awarded since the second half of 2017, though the manufacturing sector outlook remains modest.

In the services sector, employment growth in outward-oriented industries, such as financial and insurance services and wholesale trade, is likely to ease because of slowing demand from key advanced and regional economies, it said. But there should be job opportunities in domestic-oriented industries like education, health and social services.

The MOM added that reductions in the foreign worker quota for the services sector from next year, which was announced in this year's Budget statement, "will help to keep the labour market tight to sustain the impetus for restructuring, and support good employment outcomes for Singaporeans".

Kelly Services managing director and country head for Singapore, Mr Foo See Yang, said that banking and finance companies are still looking for workers with skills in fintech such as distributed ledgers and data analytics.