SINGAPORE - The PUB has issued a default notice to Hyflux's Tuaspring, giving the integrated water and power plant 30 days from March 6 to remedy defaults arising under the water purchase agreement between them.

The national water agency said on Tuesday (March 5) that it will exercise its right to terminate the agreement and "take control of the plant" if the defaults are not resolved within the notice period. The water purchase agreement (WPA) allows PUB  “to take over the integrated plant as whole, or the desalination plant alone”.

Tuaspring Pte Ltd (TPL) is a wholly owned subsidiary of Hyflux, the troubled water treatment company that has spent the last 10 months trying to reorganise to keep itself going.

The PUB said in a statement that TPL has been unable to fulfil various contractual obligations under the water purchase agreement since 2017.  In response to  queries from The Straits Times, a PUB spokesman said: “TPL has failed to provide the required plant capacity on multiple occasions.

“As much as possible, we have allowed TPL time to resolve its operational and financial defaults but our concerns have been growing.”

In addition, TPL has not been able to produce financial evidence to demonstrate its ability to keep the plant running for the next six months, it said. 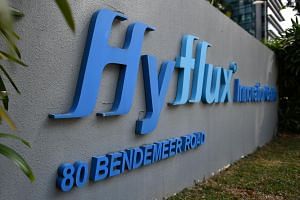 Desalinated water is one of Singapore's four national taps to ensure a diversified and sustainable water supply. "Singapore's desalination plants are integral to our water security," said the PUB.

It noted that under the agreement, TPL has to deliver up to 70 million gallons of desalinated water per day to the PUB for a 25-year period from 2013 to 2038.

"PUB has provided sufficient time for TPL to resolve its operational and financial defaults," it said.

"Given TPL's current financial position, TPL's inability to fulfil its contractual obligations is unlikely to change in the immediate to longer term. PUB is taking steps to ensure that our water security is safeguarded."

Hyflux has taken a $916 million impairment for the nine months ended Sept 30, to adjust for a fall in carrying value of the Tuaspring water and power plant and other write-downs.

This figure was released on March 2 after Hyflux submitted its latest statement of financial position to the High Court.

The impairment has put the Hyflux group in a net liability position of $136 million, indicating that the group is insolvent.

This comes after the company set out a restructuring plan last month, which will see heavy losses for its investors, and the bulk of Hyflux’s share capital, about 60 per cent, going to SM Investments, a consortium of Indonesian conglomerate Salim Group and energy giant Medco Group.

Its fortunes today are a far cry from what they were in 2001, when it became the first water treatment company to be listed in Singapore. Its profile in the global water industry grew, winning it contracts in China, India and the Middle East, and its founder Olivia Lum was feted.

But analysts say Hyflux took on too many capital-intensive projects with long lead times, borrowed too much and was too optimistic with its projections. Its debts reached a tipping point when it was unable to divest Tuaspring and another plant in Tianjin.