SINGAPORE - Amid increased scrutiny after a recent report noted an unusual spike in the number of options to purchase (OTPs) being reissued in December, an investigation by PropNex showed that this came about as a majority of upgraders found it difficult to find the cash for the additional buyer's stamp duty (ABSD).

Under cooling measures that took effect on July 6 last year, Singaporeans buying a second residential property worth, say, $1 million, have to stump up an additional $170,000. The sum is made up of $120,000 for the 12 per cent ABSD payable for the second property plus $50,000 as loan-to-value (LTV) limits were tightened by five percentage points for all housing loans granted by financial institutions.

Because of this, many buyers are asking developers to delay exercising their sale and purchase agreements - leading to a rise in the re-issuance of OTPs for units, or an apparent rise in the number of implied "returned units" from new launches.

In the light of this problem, PropNex, Singapore's largest listed real estate agency, on Thursday (March 14) submitted a proposal to the Ministry of National Development and the Ministry of Finance with three key recommendations.

They are: to lift the ABSD for HDB upgraders, revert the loan-to-value ratio for first-time private property purchasers, and revise the ABSD rate for the purchase of the second property.

A spokesman from the Ministry of National Development told The Straits Times that it has received PropNex’s proposal, and is studying the recommendations.

The move comes amid intensifying scrutiny from the authorities following a report by Credit Suisse's equity research arm that some developers, facing a slow residential market and competition from multiple new launches this year, are reportedly adopting an "ingenious sales tactic" to lock in potential buyers who may not be ready to commit to their purchases.

This has resulted in what it called "the curious case of the rising number of returned units" at some new launches after the July 6 cooling measures. 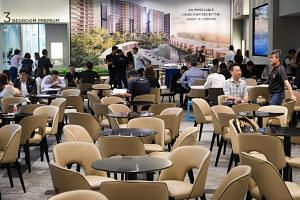 In a typical transaction for a newly launched project, the buyer of a unit who is issued an option to purchase must pay 5 per cent of the purchase price as a booking fee, of which 25 per cent may be forfeited should the buyer fail to complete the purchase and return the unit to the developer.

The buyer would then have forfeited the equivalent of 1.25 per cent of the purchase price.

But in many cases here, buyers have not given up on their purchases. Instead, the high implied number of returned units is due to some developers "continually reissuing OTPs to buyers upon expiry of a three-week validity period, without any forfeiture of booking fees", Credit Suisse said.

"Ever since the Credit Suisse report came out, we became concerned as authorities started to call our agents asking us why this is happening, and asking us if we are conducting classes to do churning. But we are not," PropNex chief executive officer Ismail Gafoor told reporters on Thursday morning.

Churning refers to agents pushing people who don't qualify, or who are not ready, to commit to a purchase.

While there are no official statistics on the number of returned units at new launches, Credit Suisse said the number spiked to 398 in December last year, compared with fewer than 150 in November.

Mr Ismail noted that the requests to developers to delay exercising the sale and purchase agreement come from buyers.

"They are asking for more time to sell their property so they need not pay ABSD," he said.

That is why Propnex is recommending that HDB upgraders buying their first private home be allowed remission of ABSD, a benefit now enjoyed by those buying new executive condominiums (EC).

It also asked for remissions to be extended to singles, single-parent families and singles who live with their parents.

"With the increase in the ABSD rate, it does not take into account the plight of genuine HDB upgraders, who are purchasing a private property for the very first time... This poses a great strain on their financial cashflow," Mr Ismail said.

On the other hand, eligible new EC buyers are able to benefit fully from the remission of ABSD.

However, the supply pipeline of ECs has been contracting since 2015. He noted that there was a 59.6 per cent drop last year in the number of EC units launched from 2017. This year, there is only one expected EC development located at Sumang Walk.

The  Real Estate Developers’ Association of Singapore had said at the association’s spring festival lunch last month that it may be timely to re-evaluate the LTV ratio for first-time property purchasers in order to allow young Singaporeans to own a private home, and review the timing of the upfront payment of the ABSD for upgraders.