SINGAPORE - A new research by the National University of Singapore (NUS) has found that the type of housing owned by Singaporean parents, along with the country's housing policies, can significantly influence the next generation's economic status.

According to the study, children from low-income families, defined as those with parents in the bottom 60th percentile nationally, show upward mobility in housing wealth, mainly due to Singapore schools being located close to HDB towns.

In contrast, children from middle-income families with parents in the 60th to 80th percentile ranks, are worse off than their parents in housing type, because government subsidies motivate them to buy into more affordable public housing.

Meanwhile, children born to the wealthiest top 20th percentile of families, keep closest to their parents' wealth levels, but are nonetheless worse off in absolute rank, in part because there is less room for them to surpass their parents.

In terms of methodology, the research team combined data from housing transaction and administrative records between 1995 and 2018, and focused specifically on children born between 1965 and 1984 (54 to 35 years old). To examine the impact of public policy on inter-generational wealth mobility, the data was then mapped against large-scale programmes, such as the Build-to-Order (BTO) and Married Child Priority Schemes (MCPS) in public housing.

The study also showed that inter-generational housing wealth mobility differs across various regions in Singapore, due to local policies and neighbourhood characteristics.

For instance, upward movements are concentrated in new towns such as Punggol, Pasir Ris and Jurong West where government policies have promoted quality public housing with subsidies. In addition, the MCPS, which provides additional subsidies to encourage children to live near their parents, has enabled them to climb up the housing wealth ladder, the researchers noted.

Higher mobility is also evident for children growing up in public housing, as well as when there are fewer restrictions for the BTO scheme. This is because public housing, especially for first-time buyers, is heavily subsidised by the government, and provides a head start for new homeowners, the study pointed out.

Interestingly, the researchers believe that the high-quality of public schools in Singapore is one of the factors that influences Singapore to have one of the highest level of mobility among lower-tiered households, as compared to other countries. 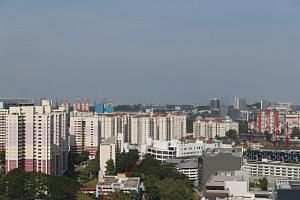 Changes in HDB grants: No price spikes for resale flats but EC crunch could worsen

Since GE2011, have HDB issues been resolved?

"Therefore, Singaporean children from low-income families benefit as long as there are public schools in their neighbourhood, whilst children from middle-income families living in new towns may not be able to find a place in high-quality public education institutions, preventing them from keeping pace with their parents' wealth," the study noted.

Children from the upper-income families generally remain in the same core central areas as their parents, and thus their mobility is largely flat.

The study was co-authored by Sumit Agarwal and Qian Wenlan from the Department of Finance at NUS Business School; together with Sing Tien Foo, dean's chair and director of Institute of Real Estate and Urban Studies (IRES); as well as Yi Fan from the NUS School of Design and Environment.

Said Prof Agarwal: "Housing wealth is the largest component of Singaporean's overall wealth, so understanding inter-generational wealth mobility is key to predicting how younger Singaporeans will fare in the future.

"Inter-generational wealth mobility is enabled by favourable public policies. In the longer term, it is likely to stabilise as citizens marry across socio-economic classes," he added.