SINGAPORE (BLOOMBERG) - They are places that encapsulate Singapore: Gardens by the Bay, with its gigantic artificial trees and botanical conservatories dripping with orchids; Lau Pa Sat, the colonial-era food hall beckoning with chili crab and chicken rice; Jewel Changi Airport, the futuristic shopping and entertainment complex straight out of Crazy Rich Asians.

All of those landmarks, and many more, are the handiwork of a company that has endured for nearly a century under a single family: the Yongs. Since the 1920s, when tigers still roamed what was then a steamy outpost of imperial Britain, the Yongs have been shaping the cityscape.

Today, a fourth generation is preparing to take over leadership of the family's private empire, Woh Hup Holdings.

That the Yongs have maintained control of Woh Hup is testament to Singapore's transformation as well as the clan's shifting focus from basic infrastructure - such as prisons and piers - to entertainment and luxury apartments.

Woh Hup executive director Eugene Yong is the first to admit construction isn't a glamorous job - "It's more important that people are proud of what we've done," the 67-year-old says. But however low-key the family may be, serving as a contractor to some of the nation's biggest property projects has created fabulous wealth.

Woh Hup's revenue in the year through June 30, 2018, was $1.1 billion, up 31 per cent from the year prior and net income totalled $51.8 million. The family declined to disclose any more recent data, but according to Bloomberg estimates the clan is worth around US$600 million (S$840 million).

Woh Hup traces it origins back to 1927, when Mr Eugene Yong's grandfather, Mr Yong Yit Lin, founded the group after moving from Malaysia in the pursuit of government construction tenders. Mr Yong Yit Lin, originally from China, got his first big break as a contractor when he scored a job building fences and garden-gate posts for a British residence.

In Singapore, the business expanded to deliver large-scale projects such as Clifford Pier, Changi Prison and the former Ministry of Labour, buildings that helped fill in the city's landscape in the early years. Mr Eugene Yong's father, Nam Seng, took over the business as a second-generation member in the late 1950s and is still Woh Hup's chairman. Mr Eugene Yong's elder brother, Tiam Yoon, is deputy chairman.

Now that Woh Hup is into its fourth generation, it is easily defying the stereotype that the third generation of wealth tends to blow through a fortune.

Ms Michelle Yong, Mr Yong Nam Seng's granddaughter, is one of the new guard. She joined the family business in 2007 after a period studying and working in Britain, and heads Aurum, a fully-owned subsidiary that focuses on boutique residential properties.

Key to Woh Hup's success has been its ability to diversify.

"So many family members had already added much value," the 41-year-old Ms Yong said in an interview from an office in Tanjong Pagar, a district where Chinese trading and tea houses have made room for yoga studios and fashionable bistros. "When the Aurum opportunity came up, it was a chance for me to take the reins and try to make something out of it." 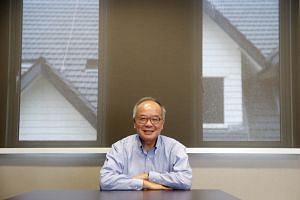 Aurum reduces reliance on Woh Hup, which Ms Yong refers to as the "castle". She describes her other ventures as "little villages outside the castle" that contribute to its success. Found8 has plans to expand beyond Singapore and Malaysia, for example, while Ms Yong is also considering a retirement living concept.

"I do believe that if you have too many people fighting over the same steering wheel, it can lead to problems," she said. "It's better to create a lot of opportunities for not just family members but also team members to grow."

As a mum to three children with another on the way, Ms Yong knows something about multitasking. Having domestic live-in help also plays a part, as does Ms Yong's husband.

"He's the one who gets the two older boys ready for bed every night so that I can work late if need be, and he also takes them out for boys-only trips to give me some down time at the weekends," she said.

Still, Ms Yong doesn't like the word sacrifice; as a mum, she has incorporated flexibility into the companies she runs.

"Being an entrepreneur and being my own boss definitely gives me a lot more flexibility than if I were just an employee," she said. "I've brought the baby into the office, and we've turned meeting rooms into a creche. At Found8, there's a nursing room and working mums can bring their children in so long as they don't disrupt other members. We have a very baby-friendly policy."

On the question of whether her children will be Woh Hup's fifth generation, Ms Yong says she would like them to be, but there are no obligations.

"In fact, we're starting to think about family governance, like corporate governance, where we set rules as to what expectations we have of different family members wanting to join the business," she said. "It's got to be merit-based rather than a charitable handout."