Prices in the nation's largest city climbed 3.1 per cent in May, the fifth straight month of gains and the most among state capitals, according to research firm CoreLogic Inc. The increase, the most since July, took the advance for the past 12 months to 13.1 per cent, the data showed.

The increase dovetails with the return of landlords to the market, higher weekend auction clearance rates and frenzied buying of new apartments. Lendlease Group said Monday all 391 apartments it offered for sale on the western fringes of Sydney's business district were sold in just four hours on May 28. 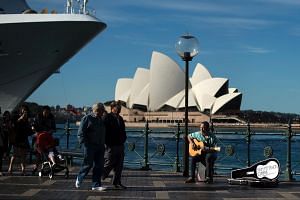 "Lower mortgage rates are likely to have a positive effect on consumer confidence and housing market conditions, with the standard variable mortgage rate now at its lowest level since 1968," CoreLogic's head of research Tim Lawless said in an e-mailed statement.

About three-fourths of homes offered through an auction were sold in Sydney in the past three weeks, CoreLogic said, after dipping below 60 percent in November.

The nation's biggest lenders reduced their mortgage rates after the central bank cut its benchmark on May 3 to 1.75 percent. Landlords have started trickling back into the market with about 47 per cent of all new mortgages going to investors in March, up from 44 per cent in October, government data showed.

Westpac Banking Corp, the nation's biggest mortgage lender to investors, last month eased some restrictions by increasing the maximum amount that they can borrow to 90 per cent of the value of a home, from 80 per cent earlier. The lender in July reduced the total after the regulator urged banks to limit home loans to landlords because they were distorting the market.

The average capital city value expanded 1.6 percent in May, the same as Melbourne, Australia's second-largest city. Perth, reeling from the end of the mining boom, was the only state capital city to see a decline, dropping 2.7 per cent, according to CoreLogic.