Investors have long viewed Singapore as an island of stability that attracts the super-rich from its less developed South-east Asian neighbours, as well as multimillionaires from mainland China.

In the first eight months of 2019, 68 condominium units in the wealthy Asian city-state were sold for $10 million and more, the highest tally since the corresponding period of 2008.

Sales of such apartments also exceeded the numbers racked up for each full year from 2011 to 2018, the consultants' analysis of transaction data shows.

Some buyers may have sought an alternative to rival financial hub Hong Kong, hit by protests, while others may have shifted funds from China after its yuan currency was devalued in a trade war with the United States, an OrangeTee expert said.

"This may explain why we have observed more foreign buyers, especially mainland Chinese, coming into Singapore lately," said Ms Christine Sun, its head of research and consultancy.

Mainland Chinese are the biggest group of foreign buyers of Singapore luxury homes.

In Singapore's prime districts, Chinese citizens bought 76 apartments worth more than $5 million in the period from January to August, versus 75 purchases by Singaporeans, data until Sept 19 show. 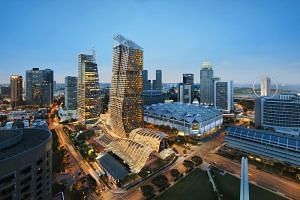 Singapore has 6 of 11 'super penthouses' now on sale in the world: List Sotheby's

Expensive apartments in premium neighbourhoods are mainly bought by foreigners, because at such high prices, Singaporeans have the option to buy landed property, such as bungalows and mansions.

Singapore does not allow foreigners to buy landed homes, except for those on the resort island of Sentosa.

"We do see that even though the stamp duties have increased... we are still seeing people putting big money on these apartments, predominantly it is more for stability than anything else," said Mr Leong Boon Hoe, chief operating officer of high-end realtor List Sotheby's International Realty.

He was referring to measures Singapore adopted last year to cool its real estate market, such as hiking additional stamp duties for foreign buyers to 20 per cent from 15 per cent.

"They are parking their money here - they know that the Singdollar won't depreciate overnight," he added.