SINGAPORE - The one-north Gateway site attracted nine bids by the time the tender process for it and two other plots closed on Thursday (Sept 5).

The top offer was $155.7 million or $1,001 per square foot per plot ratio (psf ppr) lodged by TID Residential, a joint venture between Hong Leong Holdings and Mitsui Fudosan Co.

There were four bidders for the site in Bernam Street, with an offer of $440.9 million or $1,463 psf ppr from Chinese firm HY Realty leading the way.

Ms Christine Li, head of research for Singapore and South-east Asia at Cushman & Wakefield, said developers were focused across the three sites, which may have diluted the bids and resulted in lower bids than expected.

"The bids in this batch tender contrast with the current reading of the residential market of strong home sales and record prices set in many locations," she added.

Ms Li also noted that the top bids were more measured, a reflection of the uncertainties in the global economy.

"Developers rather err on the side of caution to mitigate downside risks in the event that the supply overhang is intensified by the potential recession in the next 12 months or so," she said.

Mr Desmond Sim, CBRE's head of research for South-east Asia, noted that the demand for the one-north Gateway site was unsurprising given its "palatable size and strategic location".

Bidders were "probably encouraged by the growing tenant pool, as well as the limited options available in the private residential market", he added, noting that the last residential site in the area was launched in 2005. 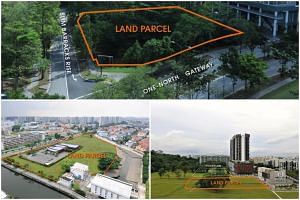 Ms Li said technology firm Razer and ride-hailing start-up Grab are building their headquarters in one-north, which could contribute to strong demand for housing, "as affluent tech workers who work long hours might prefer to live nearby to shorten their commute".

Huttons Asia research head Lee Sze Teck noted that while the Tan Quee Lan Street site is an attractive one, "only developers with the experience of developing projects in the city centre will participate which is why we do not see many bids".