SINGAPORE (THE BUSINESS TIMES) - A spate of aggressive land deals by developers last year has prompted the Singapore central bank to take a closer look at the way banks are financing development projects.

The Business Times understands that the Monetary Authority of Singapore (MAS) is collecting more data from banks through a new survey sent out to them last month.

Some of the information sought by the MAS includes the size of banks' exposures and details of the loan facilities granted for each project such as the key covenants and loan-to-value (LTV) ratios, sources say.

Where additional covenants are required for loans with higher LTVs, MAS is also seeking more details on them. When approached, an MAS spokesman said: "MAS expects banks to adopt sound credit underwriting standards in their lending practices. As part of our ongoing surveillance and supervisory work, MAS collects data from banks to monitor their lending practices to specific sectors from time to time."

The central bank had, in its Financial Stability Review published in November, highlighted that recent developments in the property market pose potential risks to stability, and that market players should take a medium-term view of demand-supply dynamics and act with caution.

"Banks should continue to maintain prudent underwriting standards and review their valuation practices to ensure that property appraisals remain realistic and substantiated," the spokesman reiterated. "MAS will monitor the banks closely."

Industry players believe that the MAS is paying more attention to the en bloc and government land sale (GLS) tenders because of the steep LTV ratios on development loans in some cases. Some market watchers go further to speculate that one of the ways the Government can douse feverish land bids is by having borrowing limits on development projects.

"It won't be surprising if the MAS follows in the footsteps of Hong Kong Monetary Authority (HKMA)," one of the sources said.

The HKMA has lowered the caps on bank loans to property developers from June 1 last year, as it seeks to contain risks in the booming real estate market. That, however, did not stop a subsequent land deal there from setting a new high.

"If there's greater prudence in the LTV ratio, developers will need to come up with more capital. Their ROE will drop, and this will cause developers to be more cautious when bidding for land," Mr Tan said.

There are existing safeguards on bank lending to the property sector. Under the Banking Act, banks' total exposure to the property sector is capped at 35 per cent of total eligible assets; there are also restrictions on exposures to single counter-party groups to prevent concentration of risks.

In addition, the MAS expects banks to adopt sound valuation processes, such as engaging independent valuers, relying on multiple valuations for each site or property, and checking that valuations are reasonable.

OCBC Bank head of real estate Richard Cheok told BT that every loan is assessed on its risks and the bank conducts a thorough credit evaluation before extending financing to its customers. "The same applies to loans extended to property developers and construction companies," Mr Cheok said.

"For the financing of any property development project, the factors that we take into consideration include the project sponsor's financial standing and track record, the sustainability of the project and collateral and/or other loan support arrangements. In addition, we are also guided by internal lending parameters which are periodically calibrated to reflect market and economic conditions."

One foreign bank, which declined to be named, said that other considerations in extending a loan include the availability of meaningful corporate recourse, the location of the asset, and the acquisition price vis-a-vis the expected gross development value of the project and that of nearby projects.

"For transactions backed by corporates with meaningful balance sheet, some banks have been willing to extend financing beyond the typical LTV ratios," the foreign bank said.

A DBS spokesman told BT: "DBS remains vigilant to any signs of market weakness in the property market and we continue to exercise prudence when underwriting new loans." 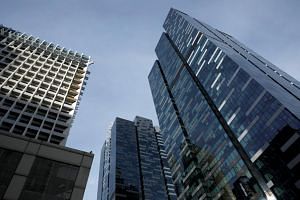 The group-level balance sheets of most Singapore-listed local developers have not shown major spikes in net gearing ratios yet, with the exception of a few boutique to mid-sized firms.

One senior management executive at a real estate company noted that developers are a mixed bag when it comes to leverage, with a few being highly geared while others are flush with cash. The question is whether the Government should regulate the entire market just based on the aggressive leverage of a few developers or projects, he said.

Hong Kong's example also demonstrates that lending curbs may not always be effective, he added.

It also tightened the screws on mortgages in May, taking aim at borrowers with multiple loans and whose income sources come from outside the city. But land and home prices in Hong Kong have continued to shoot through the roof.

Land deals in Singapore have also been keenly contested by local and foreign developers, with new price benchmarks reached last year. That has stoked a series of warnings from the Government on the risk of excessive exuberance in the property market.