Subject to approval from the authorities, the Liang Court site will be turned into an integrated development with total gross floor area (GFA) of 100,263 sq m.

The proposed project will comprise two residential towers offering about 700 residential units, a commercial component, an "upper midscale" hotel with 460 to 475 rooms, and a 192-unit serviced residence with a hotel licence.

The proposed mixed-use project will open in phases from 2024.

The new hotel will be operated under the Moxy brand by Marriott International when it is completed around 2025, while the new serviced residence will keep its Somerset branding when it opens in the second half of 2024.

At the same time, Ascott Reit, which is a wholly owned subsidiary of CapitaLand, will sell part of its interest in Somerset Liang Court Singapore to CDL. Ascott Reit said it signed a put-and-call option agreement with CDL to sell 15,170 sq m of the site’s GFA for $163.3 million to CDL, and retain 13,034 sq m of GFA.

The residential and commercial components of the new development will be owned by the 50:50 CDL-CapitaLand JV entities, while the serviced residence will be owned by Ascott Reit. CDLHT will own the hotel under a forward purchase agreement with CDL. 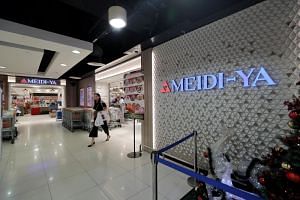 Liang Court: Some shoppers glad about redevelopment, tenants sad about having to move

With Liang Court set to reinvent itself, current tenants to vacate by March 2020

Ascott Reit said in its filing that it will use its net proceeds from selling part of its interest in Somerset Liang Court Singapore to develop the serviced residence, from the retained 13,034 sq m of GFA. The land's lease tenure will be refreshed from 57 years to 99 years. Upon completion, the estimated project development expenditure of the new serviced residence will be about $300 million.

Ascott Reit noted that the existing Somerset Liang Court is an ageing serviced residence and has been facing competition from newer hotels.

Along with the redevelopment, the consortium will also rejuvenate the river promenade next to the property, in line with the Urban Redevelopment Authority's Draft Master Plan 2019 to enhance the area's vibrancy.

The promenade's facelift is expected to generate social activities around the proposed integrated development, increase footfall and improve pedestrian accessibility along the Singapore River.

Within the Singapore River precinct, CDL owns Central Mall, an office-and-retail development along Magazine Road, while CapitaLand has a stake in the Clarke Quay mall - housed within five blocks of shophouses - through CapitaLand Mall Trust and a stake in Park Hotel Clarke Quay through Ascott Reit.

The Liang Court site marks another collaboration between CDL and CapitaLand, after their successful joint bid last year to develop a commercial and residential site in Sengkang Central atop Buangkok MRT station.

CDLHT is managed by subsidiaries of Millennium & Copthorne Hotels, which is the hotel arm of the CDL group.

Separately, CapitaLand announced on Wednesday that it is selling The Star Vista mall to New Creation Church’s business arm for $296 million.