SINGAPORE - The billionaire co-founder of Hongkong-listed AAC Technologies, which makes miniaturised components including speakers and microphones for mobile devices, is understood to be acquiring a bungalow along Leedon Park for $31 million.

The price works out to $2,000 per square foot (psf) based on the freehold land area of 15,500 sq ft. On the site is a two-storey bungalow, completed less than 10 years ago, which has five bedrooms and a swimming pool.

The property is in the Leedon Park Good Class Bungalow (GCB) Area.

It is believed that it is being bought by Ingrid Wu Chunyuan, who - together with her husband, Benjamin Pan Zhengmin - founded AAC Technologies. The company has a market capitalisation of about HK$52.6 billion (S$9.16 billion).

Ms Wu, who is in her late 40s, was born in Changzhou, China, and moved to the United States in the 1990s. She later became a US citizen but is now understood to be a Singapore citizen.

Alibaba cofounder James Sheng (also known as Sheng Yifei) is understood to have picked up a bungalow on another stretch of Leedon Park last year for $50 million. He has also become a Singapore citizen.

His purchase works out to about $1,976 psf based on the land area of 25,310 sq ft. The freehold property has two storeys and an attic; with half a dozen bedrooms and a pool. It was sold by Ocean Sky International chairman and chief executive Edward Ang Boon Cheow and his wife, Joanna. 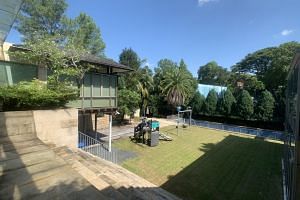 What you need to know about good class bungalows

It certainly looks like the fraternity of Alibaba co-founders who own a property in Singapore has grown.

At the time, it was a record absolute price for a Singapore penthouse. That deal translated to $3,757 psf on the 13,573 sq ft strata area spread over the top two levels of the 33-storey freehold project. Mr Sun is married to fellow Alibaba co-founder Lucy Peng. He was formerly president of Alibaba Group's consumer-focused e-commerce site Taobao.

While anyone can buy a non-landed private home in Singapore, one generally has to be a Singapore citizen to be allowed to buy a landed property in a good class bungalow (GCB) area.

Bungalows in the 39 gazetted GCB Areas - all on mainland Singapore - are the most prestigious form of landed housing in Singapore, with strict planning conditions stipulated by the Urban Redevelopment Authority (URA) to preserve their exclusivity and low-rise character.

Since the second half of 2012, the government has generally not granted approval to foreigners to buy a landed home in a GCB area. Landed residential properties in Singapore are generally the primary preserve of Singapore citizens.

A foreigner who wishes to purchase a landed residential property is required to seek approval under the Residential Property Act.

On mainland Singapore, the minimum criterion is that he or she must be a Singapore permanent resident (PR). In addition, each applicant is assessed on a case-by-case basis, taking into consideration factors such as his or her economic contribution in Singapore.

In general, on mainland Singapore, PRs are allowed to buy only landed residential properties which do not exceed 15,000 sq ft in land area, and which are not within a GCB Area.

An applicant wishing to buy a landed property within a GCB Area and/or exceeding 15,000 sq ft in land area will have to meet more exacting qualifying criteria, including that of having made exceptional economic contributions in Singapore.

Sentosa Cove remains the only place in Singapore where a non-PR foreigner may buy a landed home, although this is still subject to government approval.