SINGAPORE - There was no good news for local real estate developers and prospective property buyers at the Monetary Authority of Singapore (MAS) annual report media briefing on Thursday (June 27).

When asked if the Government would, in the near future, relax the cooling measures introduced last year to the property market, MAS managing director Ravi Menon said the measures were implemented only a year ago and it takes time to allow them to work their way. But price increase has dampened and the market is more sober, and there is a good balance holding up the market.

Mr Menon assured that the Government will continue to monitor the property market closely and stands ready to help ensure a healthy and sustainable market.

Besides the property market, the MAS is also closely watching the new cryptocurrency Libra from social media giant Facebook. Describing it as a "very interesting development" and "very intriguing", Mr Menon shared that the authority has been in discussion with Facebook and Libra Association - a not-for-profit organisation that will govern the payment network and manage a financial reserve for the cryptocurrency - and Facebook partners.

While Mr Menon noted the potential benefits of the new kid on the block of the virtual currency, he also said there are some serious concerns, but without further elaboration. "We are carefully studying it."

As to which authority would regulate Libra, he said it would depend on questions including where Libra fits in and how it works.

On whether recent protests in Hong Kong have benefited Singapore in terms of fund inflows from the Chinese city, the MAS chief said there have been "no signs of significant shift in business or funds". But he pointed out that Hong Kong's prolonged uncertainty is no good for Singapore, as the two cities complement each other. 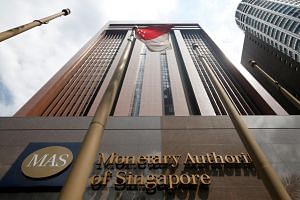 "We should focus on the income effect. Both Hong Kong and Singapore are very attractive financial centres with unique strengths and value proposition."

He also said that the global economy has weakened and this is already affecting Singapore. However, there is no need to be alarmed. "The Singapore economy is in for a rougher ride but is well placed."

The MAS held $404 billion of official foreign reserves (OFR) as at April. The OFR is invested in a portfolio of cash, bonds and equities, and is also diversified across advanced and emerging market economies, and across different currencies. Investment-grade bonds in the advanced economies form the largest allocation in the portfolio. About three quarters of the OFR are denominated in the US dollar, euro, yen and pound, with the greenback forming the bulk.

Global markets were volatile in FY2018/19. Markets generally declined in the earlier periods of the year, but rebounded strongly in the quarter ended March 31. The OFR recorded an investment gain of $25.2 billion in FY2018/19. As in previous years, the investment gain was mainly from interest income and realised capital gains, and was similar in magnitude to the prior two financial years of around $22 billion.