SINGAPORE - CapitaLand Mall Trust Management Limited said on Thursday morning that it will be redeveloping Funan DigitaLife Mall into an "experiential creative hub". 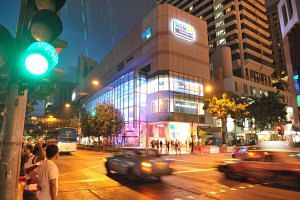 It is expected to close in the third quarter of 2016 and undergo a three-year renovation.

The mall has been a popular haunt among shoppers seeking IT goods over the past few decades.

Here are some facts you might not know about Funan.

A general shopping centre for the masses,  it was later converted into a "computer mart" by developer Pidemco Land, as part of a corporate plan to develop and promote its commercial properties as specific theme centres.

2. Two names changes over the years

The changes reflect how technology has evolved to become a crucial and central part of our lives.

In 1997, Funan Centre was renamed Funan The IT Mall and then in 2005, after some minor renovations, it was given the name Funan DigitaLife Mall.

3. The site the mall sits on was a popular hawker area

Before the geeks took over, the land on which the mall sits on - Hock Lam Street in the Civic District - was an area where hawkers used to sell food and fruit. This was the birthplace of the famous Hock Lam Beef Noodles.

In fact, when Funan Centre was erected, Hock Lam Beef Noodles became one of its first tenants, before moving to the Singapore Swimming Club, then Purvis Street and Far East Square.

While it is not something you might associate with an electronics and IT mall, Funan is where halal eatery Qiji, known for its popiah and local dishes, first had its humble beginnings, before becoming a big chain with its own website, a central kitchen, a catering arm, and a corporate office.

It was also home to Singapore's very first air-conditioned food court. This food court also became the new home of Funan Weng, the purveyor of the famous Ipoh hor fun and wanton noodles since 1955, when it had to move out of its original home at Hock Lam Street.

5. Challenger and Funan go way back

Challenger Technologies, the IT superstore, has been so successful over the years that it is now listed on the Singapore Exchange mainboard.

But it began life in Funan Centre with just one store. Today it has a total of 47 outlets. And it has remained Funan's anchor tenant the whole way.

6. Also a haven for music geeks

Back in the day, Funan was not just a mecca for tech geeks. Among its earliest tenants were Roxy Records and Dada Records, where music aficionados went to get the latest records, cassettes and CDs.

These shops also made Funan the place to go to for made-in-Singapore music. They supported homegrown musicians by selling not just commercial local releases but also demo cassette tapes, no matter how poor the quality.

During its heyday in the early 2000s, popular local music chain Sembawang Music Centre also had a store in Funan.