SINGAPORE - Faber Garden is relaunching a collective sale on Wednesday (Oct 3) at the same reserve price of $1.18 billion about six months after its first attempt closed without a sale.

The public tender will close at 3pm on Oct 31.

Mr Galven Tan, executive director, capital markets, of CBRE, the marketing agent, said: "Faber Garden is the largest freehold site in Upper Thomson. While developers have become more selective with land acquisitions after the latest round of cooling measures, centrally located sites such as this site are rare.

"The recent strong performance of Jadescape where 300 units were sold on the weekend launch, is further testament of the demand and popularity of the Thomson area," he said.

CBRE added that a transport impact assessment has been conducted for the development and the authorities will support 900 units for the redeveloped site.

Apart from its steep asking price, some analysts say the site's attractiveness may be hampered by a transport impact assessment that capped the maximum number of units allowed at 900 units. They say this LTA rule is to ensure that redevelopment will not cause a strain on existing infrastructure.

CBRE earlier said the site could yield more than 1,150 units based on the 70 sq m guideline. 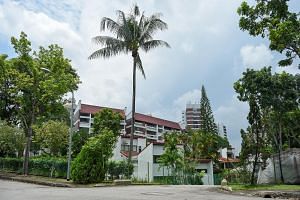 The 236-unit freehold project at Angklong Lane, off Upper Thomson Road, is near the Central Nature Reserve amid a Good Class Bungalow area, landed housing and private condominiums, as well as the upcoming Bright Hill MRT Station expected to open in 2021.