SINGAPORE - Prices of completed non-landed private homes in Singapore reversed course to climb in August, rising 0.5 per cent month-on-month, after a dipping in July.

This is according to the National University of Singapore's (NUS) flash estimates for its Singapore Residential Price Index (SRPI) released on Friday (Sept 28).

In July, prices declined 0.3 per cent, less than the 0.5 per cent drop earlier estimated.

For small units, defined as those no bigger than 506 square feet, prices rose 1 per cent in August, compared to a 0.6 decrease in July.

The NUS Institute of Real Estate Studies, which developed the SRPI series, defines the central region as Districts 1 to 4, including the financial district and Sentosa Cove, and the traditional prime residential districts of 9, 10 and 11.

To date this year, prices for the overall market are up 4.4 per cent, led by a 4.7 per cent increase in the non-central region. 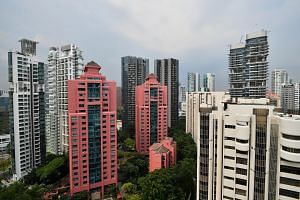 Year on year, prices have risen 7.8 per cent, with a 8.7 per cent increase in the central region, and a 7 per cent gain in the non-central districts.