SINGAPORE - A freehold condominium project in Amber Road which boasts a rooftop deck for recreational activities will be launched on Saturday (May 4).

Early bird prices start from $1.088 million for a one-bedroom unit with a study to $4.98 million for a five-bedroom premium unit, CDL said in a statement on Thursday (May 2).

Unit sizes range from 463 sq ft for a one-bedroom plus study apartment to 5,005 sq ft for the largest penthouse, which has six bedrooms plus a study.

The condo project is a short walk from the upcoming Tanjong Katong MRT station on the Thomson-East Coast Line. Schools within a 2km radius include Tao Nan School, CHIJ (Katong) Primary and Tanjong Katong Girls’ School. 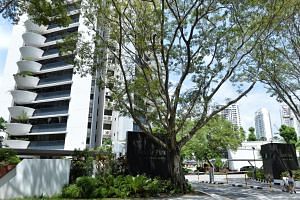 Called the Stratosphere, it features a 600m sky jogging track, touted by CDL as the first for a condo in Singapore, as well as a yoga deck, gym and spa pool, among other facilities.

“Many of them are fans of the East Coast area and they know it is rare to find another District 15 freehold project which sits on such an expansive site so near an MRT station,” he said.

Mr Chia expects the take-up to be good due to the condo’s location and the “very attractive” early-bird prices.

ZACD Group head of research and consultancy Nicholas Mak said of the pricing: “It reflects the quality of the location, the freehold tenure as well as the dependability of a brand-name developer, which will command a premium on the price.”

He added that the East Coast area is a prime residential location popular with residents and investors as it is one of the few locations in Singapore that offers sea views and access to the city.

Amber Park is expected to be completed in 2024. The launch comes amid the entry of 2,989 new private homes to the market in the first quarter of this year, about 80 per cent more than in the previous quarter.