SINGAPORE - Konnectivity, a company owned jointly by Keppel Corp and Singapore Press Holdings (SPH), will buy all the remaining M1 shares it does not own at $2.06 each from next month.

It owns 94.55 per cent of the telco after a voluntary unconditional general offer closed on Monday (March 18).

"Due to strong shareholder support, (Konnectivity) is entitled, and will exercise its rights, to compulsorily acquire all the shares of the shareholders who have not accepted the offer," said a joint statement by Keppel Corp and SPH on Monday evening.

In a filing with the Singapore Exchange last month (February), Konnectivity had offered to buy the remaining shares at $2.06 each by a deadline that was extended to March 18.

Konnectivity is expected to hold 80.69 per cent of M1 after the acquisition, with the rest owned by Keppel Telecommunications and Transport, Keppel Corp's subsidiary.

M1 will then be delisted following approval from the Singapore Exchange.

Keppel, with SPH, will subsequently work with the telco to improve its competitive edge. 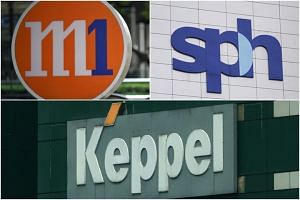 "M1 will devise a multi-pronged strategy of innovation, technology adoption and digitalisation to better meet the needs of its customers," the statement said.

It will also work closely with M1 management to "renew the company's focus (and) reinvigorate its products and services", among other strategies, Mr Loh added.

SPH CEO Ng Yat Chung said the acquisition marks "the beginning of a strategic collaboration between SPH, Keppel and M1".

Both SPH and Keppel Corp are founding shareholders of M1 when the telco was formed in 1994 to enter the Singapore mobile telecommunications market. Other consortium members are Cable & Wireless and Hong Kong Telecom.

He added: "Keppel and SPH bring with them their organisational strengths and stability, which will help us chart our growth plans aggressively, while seeking significant opportunities... with them."