SINGAPORE - Co-working space provider JustCo is set to take over a 16-storey commercial building in a high-end business district in Seoul, to transform it into a mega shared workspace.

Called JustCo Tower, it is sited in the Gangnam Business District, where real estate prices are far above the city’s average.

The new lease will be its largest co-working centre in Asia Pacific and the first time it is leasing an entire building to rent out such space, said the company, which is headquartered in Singapore, in a statement on Thursday (Aug 1).

Known previously as FL Tower, JustCoTower is targeted to open in November (2019) as the brand's fourth centre in South Korea in less than a year, it added.

JustCo founder and chief executive Kong Wan Sing said 60 per cent of the space has been pre-leased ahead of its opening.

"JustCo's rapid expansion within South Korea speaks volume of the market potential in co-working, with increasing demand from large corporates, including Fortune 500 companies," he added.

The company also said large organisations are seeing increasing value in such spaces because of the flexibility, cost savings and access to the region. 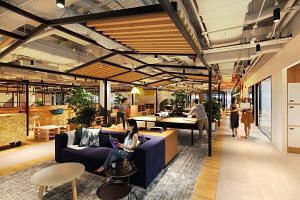 Within the 140,000 square feet tower will be private suites, phone booths, hot-desking areas and two event spaces: a tiered-seating open area for townhall events, and three seminar rooms with collapsible partitions that can be combined to form a space for more than 100 people.

It will also include sleeping pod rooms, an in-house cafe and a multi-purpose rooftop lounge where members can bond over basketball and wellness programmes.

JustCo will also pilot the use of "smart" solutions and technology in the building, the company said. For example, tenants will be able to use its mobile app for card-free access, digital navigation in the building, and placing orders at the in-house cafe.

"We are continuously ramping up our technology solutions to drive tech-savvy and smart digital workspaces that are scalable and will enhance the experience for JustCo members," Mr Kong said.

JustCo has 16 co-working spaces in Singapore which are open or opening this year, as well as others in such cities as Bangkok, Shanghai and Jakarta.

Some of its tenants include interior design company Wilson Associates in Singapore, pharmaceutical company Novartis in Taipei and industrial conglomerate General Electric in Bangkok.